The Royal Malaysian Police is once again back in notorious spotlight. Before the recommendations of a recent Commission into police abuse had been considered and implemented by the authorities, the police has gone and carried out another ‘naked’ operations.

During the 2nd day of Chinese New Year, Kajang police caught 11 senior citizens, friends among themselves, playing a harmless game of mahjong, trotted those Ah Pehs and Ah Chieks (Chinese for elder and younger ‘uncles’) off to the Kajang police station, where those grandfathers were stripped down to their underwear - despite the recent Commission’s admonition over unjustified & unnecessary stripping - and had their heads shaven naked! 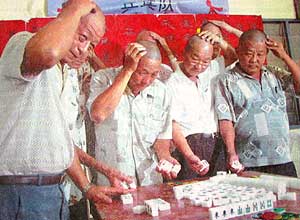 Head shaven naked for a game of mahjong, at their venerable age?

“It’s something wrong with them. They seem to enjoy inviting greater scrutiny of their actions. What are the guidelines that must be followed in detaining someone? Now, apparently they, the police can do anything. They catch you and they can shave you bald, it’s quite ridiculous. I don’t know how these things could happen.”

Opposition Leader Lim Kit Siang was astounded by the police high-handedness so soon after the Commission's report, but was even more disturbed by Kajang police chief Mohd Noor Hakim’s statement that it was a normal lock-up procedure to shave a detainee’s head and that the police will continue with the procedure.

Yeah, the naked ear squat was also normal lock-up procedure. But that's our usual unrepentant, arrogant & sadistic police, though that bloke didn't explain how being caught for a game of mahjong necessitated the old men's heads to be shaven.

But then, maybe those granddads had AK-47s hidden in their few remaining hairs?