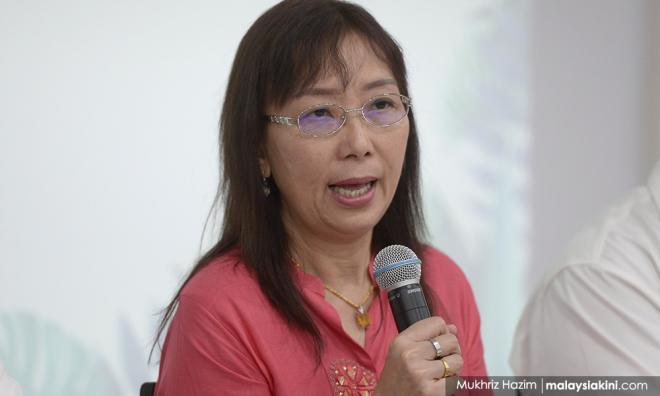 “Nazlan was only appointed as MRB chairperson about a month ago but appeared to have worked at warp speed to obtain the necessary approvals to spent RM100 million of public funds for a mega project in his parliamentary constituency.

“The speed at which the project was announced raises many questions. There are many layers of proposals and studies that must be done even at the MRB level before a project of this size can be approved by the board.

“The previous Pakatan Harapan government, through the Finance Ministry and my ministry have reset and imposed much stricter procedures before any big projects are given approvals. This will take more than one year at least.

“I am sure the board could not have done all the necessary studies to justify spending RM100 million for the RTC in such a short time. Clearly, all fiduciary and Finance Ministry procedures have been violated in this case,” Kok (above) said in a statement today.

She also stressed that this proposed RTC in Jerantut is an entirely new project under the Perikatan Nasional (PN) government.

There are other examples of similarly “unwarranted and wasteful” projects sanctioned by the previous BN government-appointed boards years ago under the guise of so-called model rubber technology and processing schemes, she said.

This includes a project by former MRB chairperson and Jasin MP Ahmad Hamzah who had announced an RM44 million project in his constituency in 2010, added Kok.

The project has since turned out to be an “unsalvageable white elephant” and is still bleeding millions of ringgit exceeding the original cost. The project remains uncompleted to this day, she said.

Kok gave other examples such as the Rubber Research Institute of Malaysia Mini Stations (Rriminis) all over Malaysia and the rubber integrated processing complex (IPC) a few years ago at Kota Tinggi, Johor, which she said has swallowed more than RM130 million in federal government funds and MRB reserve funds.

The construction for the IPC at Kota Tinggi also remains uncompleted, she said, and so it is still a drain on public resources as public funds are still being channelled to it.

During her time as the primary industries minister, Kok said she ordered an immediate moratorium on new projects after she was briefed on the mismanagement of funds and assets of the MRB by the previous BN-appointed board.

“As such, my appointed board managed to plug much of the leakage and practised prudent management and as a result, saved about RM50 million in the 20 months in the annual operating budget,” she said.


Kok then questioned the need for an RM100 million RTC in Jerantut, as she pointed out that Malaysia already has several fully operational rubber technology and research centres in Sg Buloh as well as the Tun Abdul Razak Research Centre in England and in Kota Tinggi.

“All these centres are turning in top quality work and they are operating at optimal levels and have some levels of excess capacity now.

“As such, there is no pressing need whatsoever for another research centre for now, at least given the present economic conditions, especially when public funds are urgently needed to cater for the immediate and pressing needs of the rakyat, including rubber smallholders,” she said.

Aside from the country’s present economic conditions, Malaysia remains under partial lockdown in the fight against the Covid-19 pandemic, she added, and yet Nazlan appears to have Prime Minister Muhyiddin Yassin’s ear in approving a non-essential multi-million ringgit project in his constituency.

“As such, I strongly urge Muhyiddin to explain if he is aware of this mammoth RTC project which is to be built in the parliamentary constituency of the MRB chairperson he endorsed,” Kok said.

She stressed again that there is no need for a new RTC, adding that she came to greatly admire the work by the team of agricultural scientists in MRB led by director-general Zairossani Mohd Nor during her 18 months as the primary industries minister.

“Simply put, there is no need to build an RTC in Jerantut or anywhere for now unless there is a clear political reason for its location and there is little or no basis to justify its actual need.

“Instead, it will be better for Nazlan to look into the need to upgrade the existing research facilities in Sg Buloh and boost their manpower and expertise to advance new innovations,” she said.

Kok said in her 18 months in the ministry, they had improved MRB operations, cut excessive expenditure and spent funds judiciously, which resulted in MRB becoming self-sufficient.

MRB did not require funding from Putrajaya then, as under Harapan, the MRB operated efficiently mainly by using interest generated from the RM1.5 billion it had in fixed deposits.

“From Nazlan’s statement, I fear that ‘vultures’ are now back to drain the MRB’s fixed deposit reserves.

“Drawing down RM100 million for a needless project could be the start of treating MRB and other GLCs as cash cows for them to milk for their narrow political agenda which is far removed from the interests of the rakyat.

“Sometimes I wonder if these (political) appointments are to siphon off funds in this manner to build the war chests by the respective parties to be ready to buy power in the 15th general election,” Kok said.

By using public funds for a mega project in his own constituency, Nazlan has shown why there is public fear against unbridled political appointments for GLCs and other public entities, she said.

“This is exactly what we and the rakyat feared when Muhyiddin ‘surrendered’ lucrative GLCs to politicians, especially MPs to keep his hold on power.

“However little does he realise that this will eventually lead to the destruction of the nation’s economy while a few are enriched,” Kok said.

She said this current situation is why the Harapan government had kept the appointments of politicians in GLCs to the minimum.
Posted by KTemoc at 8:40 pm