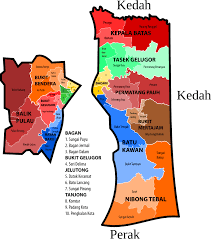 Penang Umno Liaison chairman Datuk Zainal Abidin Osman said the main problem they would face would be on the distribution of seats, which would result in infighting.

However, he cautioned Penang Umno members to not regard the situation as an advantage for them.

Which of DAP's seats on the island will be given to Pribumi?

PAS has threatened to contest in Permatang Pauh and the 3 state seats in that federal constituency.

As Moody is still negotiating with PAS, perhaps surrendering Permatang Pauh to Pribumi may be more helpful, to avoid PAS' dedah-driven intent to play 3-corner fights for the benefits of UMNO?

What? ... PAS' dedah-driven intent to play 3-corner fights for the benefits of UMNO?

Well, PAS talks about contesting in DAP seats which normally won't benefit the Islamic Party in the least, and for a party which hasn't enough election funds to go nationwide (unless it cut down more trees, wakakaka), doesn't this point to BN-UMNO providing financial support for PAS to play Tuan Kacau?