By the by, have you heard of the proverb: "Close the stable door after the horse has bolted"? 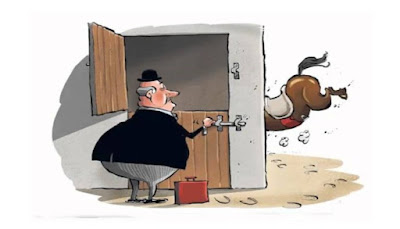 The proverb is applicable in a number of events in Malaysia. You may wish to look up its meaning.

I will provide an example here, namely:

Following the bus crash in Johor, one of a number of such crashes occurring frequently in Malaysia where the latest of which killed 14 people, smartie cats are now emerging to talk about increasing pay for bus drivers as one measure to discourage them from operating in 'chop-chop' fashion to earn more commission through faster turnaround.

But far worse, no government or quasi-government body or government assigned agency oversighting, licensing, or researching operations of the buses as a public transport (eg SPAD, JPJ, JKJR, MIROS, previously CVLB) has ever been blamed or any officers sacked, even though the periodic bus crashes in Malaysia have been scandalously frequent.

The Star Online reported that:

National Institute of Occupational Safety and Health chairman, Tan Sri Lee Lam Thye, expressed his disappointment with the authorities over their failure to implement the 51 recommendations of an indepen­dent advisory panel to prevent fatal accidents involving buses.

“If only some if not all of the re­­commendations had been implemented, we would not have to continue reading stories of fatal bus accidents in the papers,” he said when contacted by The Star yesterday.

When will be the next one?
Posted by KTemoc at 9:58 pm