Penang Gerakan today criticised the DAP-led state government for a flood mitigation project which it claimed resulted in a fire ant invasion at the public park in Taman Jajar off York Road.

Its vice-chairperson, Lim Boon Ten, said the public park was next to the Air Itam River and the sand dug up from the river had created a conducive breeding ground for the ants.

He said the ants were harmful as their sting could cause itching, swelling, and redness of the skin on the people who used the park for their recreational activities.

“The Penang Drainage and Irrigation Department (DID), which is working on the state flood mitigation projects, is merely digging out the sand along with garbage, plastic bags and water bottles from the river and leaving it on the river banks, resulting in the fire ant invasion at the recreation park,” he said to reporters after visiting the park today.

Lim, who is also the state Gerakan coordinator for Datuk Keramat, said the state DID had failed to clean up the sand, rubbish and other waste left on the river banks. 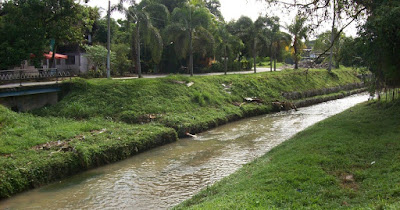 Wakakaka, Gerakan must be real desperate to blame Guan Eng for such issues.

I was stung by fire ants as a kid. Those ants were called (in local Hokkien) 'kong-kiah' - for more, see my Kongsamkok post Urban legend 4 - the secret of the anthill.

Kong kiah have existed in Penang for eons, and sand dredging of rivers for decades. But trust Gerakan to find the most trifle of matters to blame Guan Eng.

It's indication of an approaching election, when Gerakan, MCA and UMNO awake from their dedak satiated torpid slumber.