Pakatan-Pribumi must get down to brass tacks

At an event in Penang last night, the DAP leader stressed that Pakatan Harapan’s endorsement of Datuk Seri Anwar Ibrahim as prime minister-designate remained unchanged, even though the Federal Court dismissed the PKR de facto leader’s bid to review his sodomy conviction and jail sentence.

Lim said that both the PKR president and Parti Pribumi Bersatu Malaysia (PPBM) president would make suitable candidates for the interim posts, in light of the new electoral pact between Pakatan Harapan and PPBM.

“I will add that with the agreement reached by Pakatan Harapan and Parti Pribumi Bersatu Malaysia on Tuesday for an electoral pact to defeat Umno/ BN (Barisan Nasional) in the next general elections, Tan Sri Muhyiddin Yassin will be a good candidate for the post of interim Deputy Prime Minister,” Lim said,

My visitor asked me if PKR cannot be trusted why then has Kit Siang constantly proposed Wan Azizah as MB Selangor and also PM-in-waiting or Pakatan's interim PM (until a Pakatan government can process the release and full political rehabilitation of Anwar).

Pakatan Harapan is made up of 3 parties, initially PAS, PKR and DAP which subsequently saw PAS split into ulama-PAS and Erdogan-PAS with the latter known as Amanah replacing the original PAS in Pakatan. DAP knows it can't offer any of its members as PM for a number of reasons:


... thus it has ruled its own MPs out. That leaves PKR and PAS (now Amanah).

For obvious reasons it won't recommend PAS. Even PAS swearing off Hudud won't reassure the DAP because PAS leaders are known to putar belit like ular.

Personally I believe some Amanah blokes are capable to be potential PM so long as the non-Muslims can be assured none will raise or bulldoze the issue of Hudud and full syariah laws to replace secular civil laws a la Pak Haji Ustaz Hadi Awang,

At this point in time, with Pak Haji Ustaz currently frightening the bejesus out of non-Muslims and some Muslims, maybe it's still a bridge too far for non-Muslims.

That leaves the PKR for a Malay PM-anointed. From bitter experience, the DAP can't trust Azmin (and Tian, wakakaka, but this Cinapek has no standing in the consideration of a future Pakatan-Pribumi PM or interim PM).

Thus, in the absence of Anwar and with Nurul being too blooming young, poor Wan Azizah, reluctant as she may be, remains the One-eyed Mama in the Kingdom of the Blind. But she ameliorates the difficult situation by having a magic fan, wakakaka.

When LKS proposed Wan Azizah he stressed on the qualification of 'interim', meaning the situation changes when Anwar Ibrahim is released:

... both the PKR president and Parti Pribumi Bersatu Malaysia (PPBM) president would make suitable candidates for the interim posts, in light of the new electoral pact between Pakatan Harapan and PPBM.

... yadda yadda yadda ... Tan Sri Muhyiddin Yassin will be a good candidate for the post of interim Deputy Prime Minister ...

Naming Moody as proposed DPM is just a concession to Pribumi being in the new coalition.

And that's why LKS has NOT mentioned Azmin at all, wakakaka. The DAP nominating Azmin would be for the Rocket Party like what Desiderius Erasmus once said, "Colubrum in sinu fovere" which means 'to nourish a serpent in one's bosom', wakakaka. 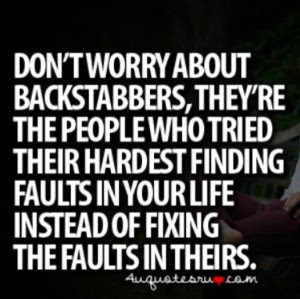 Nor was Mukhriz mentioned because we could well ask on behalf of LKS "Who the f**k in the scheme of coalition stuff is he?"

But these are all saap-saap-suoi (small matter) stuff.  The new Coalition must not stop at just the interim PM and interim DPM. Who will be in the next cabinet?

And indeed, if we have an interim DPM, who then will be the substantive DPM?