Is it finito for Manmanlai?

MM Online on the political end of Anwar Ibrahim (extracts): 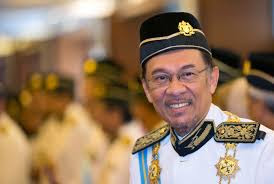 The Federal Court said it found no proof that another panel of judges and the Prime Minister's Office had been in contact before opposition politician Datuk Seri Anwar Ibrahim's sodomy conviction last February.

Thus the Court of Appeals' guilty verdict and sentencing of Anwar Ibrahim hold.

Depending on your political and personal affiliations, you are either condemning the verdict of the Federal Court or praising it, that Anwar Ibrahim remains guilty on the sodomy (II) charge.

I admit willingly I personally do NOT like Anwar Ibrahim but that does not mean I rejoice at his confirmed incarceration, nor do I question the decision of the Federal Court.

My dislike for him has to do with his performance (or lack of) as an UMNO minister (in various capacity where his worst was as Education Minister) and his pathetic hypocrisy after he was expelled out of UMNO by Mahathir.

Then Anwar had seized on the issue of much required reforms in politics, government policies and public governance, voicing those in his battle cry for and of Reformasi, a rallying call which found resonance among younger Malaysians.

But for me, he lacked conviction in his so-called reformist policy because he did NOTHING, zilch, kosong during his 16 years of luxuriating in UMNO even when he was at times the acting PM. No siree, not even a whisper of any reform.

What's the point of shouting and screaming for reformasi when he did not even pay a single iota of heed to that during his wonderful times in the upper echelons of UMNO.

As for his series of sodomy, the first under the Mahathir regime and then under the Najib regime, I wasn't all that interested in his so-called Muslim sins.

I quite suspect there are far more sodomites among Malaysians than just Anwar Ibrahim, but alas, he was the DPM and heir apparent to then-PM Mahathir who was by that stage outraged by Anwar's treachery to him in the exhibition by Ahmad Zahid (then UMNO Youth Boss) calling for Mahathir to resign, presumably for Anwar to take over.

Then Sodomy II happened on Najib's tenure as PM, and today marks the long drawn trial that now confirms Anwar Ibrahim will be jailed for 5 years (not counting time off for good behaviour).

While some dismiss the sodomy charges as conspiratorial and a frame-up, others condemn jailing Anwar for a mere case of non-mainstream sexual preference, which trial would not see even daylight in Western countries like Australia and Europe.

But alas, this is Malaysia where Muslims consider homosexuality a sin and crime. And that's why the LGBT people have been persecuted (not just prosecuted).

But what puzzles me have been the following points:

OK, don't take my word on those various sections of the Malaysian Penal Code. I too am confused even though I may not be a Muslim. Please ask a law expert.

Those who support Anwar would argue Saiful is a big size adult man and thus not possible for 61-year old Anwar to physically force him into an act of sodomy.

Those who are against Anwar could argue he was a man of political power and social high position, and had by those powers and authority intimidated Saiful into complaint partnership in an act of sodomy.

However, Rafizi Ramli who himself is possibly facing imprisonment mentioned just a week ago that PKR has a plan to make Anwar Ibrahim PM if Pakatan Harapan wins the coming election, which could be roughly called 'Kajang Satay II' though elevated to federal level.

But was Rafizi's plan made prior to the current entente cordiale with Pribumi? If so, has he a new plan?