You know, it's quite amazing when acting Transport Minister has to declare that Captain Zaharie Ahmad Shah and his co-pilot Fariq Ab Hamid did not request to fly together, meaning that there have been suspicions that the two could have been conspiring to hijack the plane together - yes, even the pilot of a plane if intending to illegally commandeer an airline aircraft would be termed a hijacker. 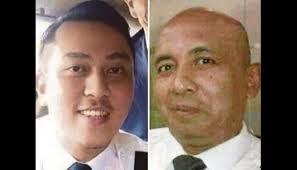 These queries on and indeed doubts as to the innocence of the two pilots of MH370 have taken the inquiry into new territory, what with the IGP stating that police investigations are now focusing on four possibilities, namely, hijacking, sabotage, psychological and personal problems, ...

... the last two possibilities being directed at the two pilots or at least one of them, while the former two possibilities, hijacking and sabotage, have not excluded their (or his) possible involvement.

It's fortunate the investigators didn't mention anything about Captain Azaharie being a strong supporter of Anwar Ibrahim because to link the missing flight with Mr Manmanlai, much as it might be a wet dream for some UMNO people wakakaka, it's a ludicrous notion.

But it's a salutary lesson for some Pakatan supporters not to moronically attribute the missing MH370 to divine retribution for the conviction of Anwar for sodomy. Remember the lesson of the revolving door frog in Bota, Perak and how that PKR boast bounced back to hurt Pakatan in Perak. Now that's retribution, whether divine or otherwise, wakakaka.

Anyway, as we have heard, even if the two pilots were not involved, there was nonetheless a person or persons who knew how to operate a B777 involved in its hijacking (let's call it that in the meantime until we know more) because of the 'expert' way in which the flight was flown away to the west along established air routes..

But I'm not all that convinced that two or one MH370 pilot were/was involved or that there was a third person, someone who knew how to operate a B777.

Let's recapitulate what we have learned from Rodzali's statement: "Based on military radar readings from its station in Butterworth, MH370 may have turned west after Kota Bahru and flew past the east coast and Kedah", and that "The last time the plane was detected was near Pulau Perak, in the Straits of Malacca, at 2.40am".

The above two points are very significant because they denote that MH370 was still being flown by a professional pilot, whether he was in full consciousness or partially physically impaired, more likely the latter.


Then, I was not aware of the full information in the turn back of MH370 because the RMAF did not reveal all of them other than its tentative information of the aircraft's radical directional change to the west.

Based on that limited information I had then believed the remaining semi-conscious pilot (in a severe state of hypoxia due to suspected slow depressurization) in his desperate turn back had also made an instinctive professional attempt to comply with the appropriate cruising level required by Instrument Flight Rules, to fly at EVEN thousands of feet (32,000 or 34,000 feet) to KL instead of the ODD thousands of feet it had earlier cruised at to Beijing (35,000 ft).

Let's re-examine what I wrote in the 2nd dot-point of extract above, to wit (underlining below are mine):

Actually both RMAF and Singapore radar (civilian or military?) were right!

How, you may ask?

Three days after I had written Where is MH370, or where MH370 is?, that was on 15 March 2014 (yesterday), the Malay Mail Online published Radar data shows MH370 flew erratically, NYT reports in which it stated (underlining below are mine):

Missing Malaysia Airlines flight MH370 climbed to 45,000 feet ― above the Boeing 777’s approved operating altitude ― in the moments after its transponders stopped communicating, according to raw military radar data released by Malaysia.

MH370 then fell sporadically before reaching 23,000 feet ― well below the 35,000 feet cruising altitude — as it flew over Penang, the New York Times reported yesterday citing US government officials and sources familiar with the investigation. [...]

One aviation specialist told the NYT that the erratic changes in altitude suggested it was pilot-induced rather than mechanical. [...]

Others said it may be due to MH370 being flown manually after autopilot was disengaged by the plane veering off its pre-programmed flight path to Beijing.

In these, we can see how both Singapore and Malaysian radar authorities were initially reluctant to fully 'tell' what they had seen, probably because of fear of comprising their true defence capabilities inasmuch as China was initially reluctant to release their satellite photos, and then only did so because of mounting Chinese public anger and, as alleged by western defence analysts, after deliberately degrading the quality of those photos to mask their true satellite intelligence gathering capabilities - see my post MH370 shows Chinese government as S.N.A.G.

Be that as it had been, that MH370 zoomed up to FL450 and then dropped to FL230 would be termed as very very violent air manoeuvres.

Therein in those violent air manoeuvres lies my lack of conviction in the current official belief that one or two of the MH370 pilots or a third party who's an expert in or at least very familiar with B777 operations and systems had made the turn back and flown the flight towards the west.

Why would such very violent manoeuvres be required in the turn back and amended direction if MH370 was operated by one (or both) of the pilots or a 3rd party B777 expert?

All the person in control would need to do was to re-program the aircraft FMS (flight management system) including modifying the flight plan for the aircraft to take up a new flight level and a new flight route. This could be conveniently done by selecting that route from a saved library of routes used by MAS in the FMS or by manually programming the required new waypoints into the FMS, all with push buttons technology and not by manually flying the aircraft.

Thus there could be two possibilities for those very violent manoeuvres, namely:

(a) there was a fight or struggle over the aircraft controls, or

(b) a severely hypoxic-affected pilot had in his impaired state attempted to change level but erratically muddled that manoeuvre, first yanking the control stick backwards (thus zooming the aircraft to way above the B777 maximum operating altitude, meaning the hypoxic conditions for the crew and passengers would have worsened or even if there was no depressurization already, took the cabin altitude to above 10,000 feet but why would he do that if he was not suffering from hypoxia?) and ...

... subsequently in attempting to correct that initial error, shove the controls forward to descend the aircraft violently, losing more than 20,000 feet to reach FL230, before he became unconscious and the aircraft FMS then took over to re-stabilize the aircraft at the programmed flight level.

(a) why should there be a violent struggle when a 3rd party (if he had entered the cockpit cabin to seize command of the flight) could have easily knock the two pilots out with a heavy weapon (butt of a gun?) or shot them, dragged them aside and assumed the pilot seat, or ...

... if it had been one of the pilots, used some pretext to render the other pilot unconscious (stood behind his colleague and knocked him unconscious) or even sent him to the back on some fabricated reason and then locked him out of the cockpit cabin!

And if the two pilots were collaborating, then where was the problem or reason for those very violent manoeuvres?

With the aircraft in such violent manoeuvrings, with drinks and whatnot on cabin tables flying all over the show, why hadn't the cabin crew or passengers reacted, say, by phoning their relatives or someone on the ground? Perhaps they were all unconscious!

Thus I'm not in the least convinced, principally because of those inexplicably very very violent manoeuvres.

Okay, the police has seized Captain Azaharie's home made flight simulator to investigate for possible links to any untoward plans for Flight MH370.

Look, I could be wrong about Captain Azaharie but he has been not only a very experienced B777 pilot but also a DCA appointed pilot examiner for the B777 - do you believe he needed that home made simulator to plan a hijack? Hey, perhaps to simulate (rehearse) a turn from a north-easterly direction to a south westerly one? I find that notion quite ridiculous and laughable.

(b) Okay then, how did the flight then assume a flight track via new waypoints on a new air route (airways)?

I can't answer that. Anyone out there can help with this one, like for example, could a hypoxic-affected pilot, already suffering from severe euphoria (in an equivalent of a drunken state due to lack of oxygen, and not by an abundance of alcohol in his blood system), in attempting to re-program the FMS back to KL inadvertently re-program it to take Flight MH370 on its new path (by mistakenly selecting one of the stored MAS flight plan programs to the west via the northern route?).

I admit I have some doubts on this inadvertent flight plan amendment to the west, but look I am wildly speculating, because I cannot explain the violent manoeuvres of the flight zooming up to FL450 and them plummeting down to FL230 unless it was carried out by a severely hypoxic-affected pilot or, ...

... by a violent struggle in the cockpit which I had already explained away.

Oh, by the by, before I end this post, one full of questions rather than explanations, for those of you who believe that MH370 escaped radar detection by flying low, remember what I had said, that 'how both Singapore and Malaysian radar authorities were reluctant to 'tell' what they had seen, because of fear of comprising their defence capabilities just as China was initially reluctant to release their satellite photos .....' etc etc.

Yessiree, they might have seen and known but nosiree won't tell!

Besides, a low flying jet, assuming that was even true, won't fly very far because jet engines at low altitudes drink up fuel the way the way fish drink (a la the saying 'he drinks like a fish').

No way that presumed low flying B777 could have reach the shores of India, let alone Kazakhstan - perhaps at the most, somewhere in Myanmar or eastern Bangladesh!