What's going on in Kajang 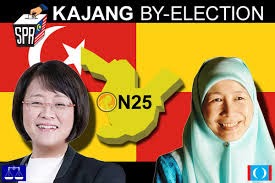 Alamak, the EC reported that only 17,977 voters comprising 47.24% the Kajang electoral roll had cast their votes by 1 pm. This was accompanied by the following Malaysiakini news snapshot report:

2 pm: Turnout is 53.71 percent. The turnout at close of polls in the 2013 general election was 87 percent. Pundits say that lower turnout will hurt PKR.

On Twitter, Anwar retweets urgent calls for voters to turn up to vote.

But Malaysiakini reported that while there was a scuffle it was nowhere near Anwar.

Aiyoh Fahmi, why have you resorted to such tweetering?

Anyway, it seems the following has been happening, wakakaka.

Chew Mei Fun and MCA aren't expecting to win but will be most rapt if she can secure just 25% of the votes, which will be an increase from its 2013 miserable 18%. That will be cause for humongous celebrations, wakakaka.

Aiyoyo, MCA has certainly lowered its expectation to a more realistic level.
Posted by KTemoc at 4:25 pm