It's quite sad that currently at such a tragic time some people seem to find comfort in lambasting our aviation agencies (DCA, MAS etc) of poor performance. 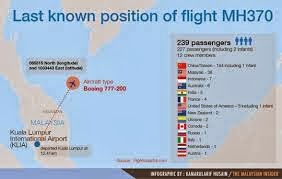 Criticisms are common and at times helpful but the ones I have read on the media interactive forums and also on my blog have been excessively abusive and venomous, and sometimes misdirected, thus making them nonconstructive. I suspect this could be due to the deep toxicity of our politico-social environment.

One of my blog visitors have condemned MAS for not acting until 5 hours past the 'lost contact' point. He has also condemned me for writing like RPK, which I take as an undeserved compliment, wakakaka. But alas, I regret he saw fit to label RPK with a racist term. I'm afraid I can't help him with his sad prejudice.

Anyway, I explained what could possibly be the reason for MAS not IMMEDIATELY announcing publicly its fears for MH370 at the time of 'lost contact' as my blog visitor had angrily complained about, as follows:

Nobody is too eager to condemn ANYBODY & yet the truth of the matter is the sloppiness in MAS/DCA/MAHB have no sense of crisis management, This comes out fast & clear in ALL their official press release, as compared with the Asiana incident in San Francisco International Airport (SFO).

The biggest blunder was the closed to 5 hrs delay in acknowledging the 'accident'. The subsequent coordination was pathetic to say the least, as if NO LIFE was involved.

For a start, can we equate the Asiana incident in San Francisco International Airport, which was an accident on land, with the missing MH370 where a multinational force of more than 40 ships and 20 aircraft drawn from China, the United States, the Philippines, Indonesia, Malaysia, Singapore, Thailand and Vietnam (shortly to be joined by Australia) have been searching the suspected area in the South China Sea for a couple of days?

But I doubt he/she wants to know because I suspect he/she's already dead set on hentam-ing (bashing) our own authorities.


In any such aviation situation where an aircraft has been deemed to be 'missing', as aviation experts will tell you, there would be stages in escalating the required actions.

The initial stage is technically known as INCERTFA or Uncertainty Phase. It's when the normal aircraft monitoring authority, Air Traffic Control (ATC) believes a situation has occurred in which there could be nascent doubts about the safety of an aircraft, and which then needs close monitoring and more information on the situation. In MH370 case, I suspect this would have occurred when it didn't contact Vietnamese ATC who would have then counter-checked with KL ATC.

Usually in such a situation, ATC would coopt the assistance of other aircraft flying in the area to contact MH370, because aircraft optimum radio communication (usually in what is described as Very High Frequency range or VHF) relies on direct line of sight where the higher one is the better would be the communication connection (transmissions and reception). Thus another aircraft which would be higher than the ATC radio antennae would find it easier to contact the aircraft which ATC wants contacted (for information or for assurance it's safely flying).

An anonymous pilot had claimed he did so while flying to Narita. He even offered the information he could recognize the voice of the MH370 copilot which implied he would be a Malaysian and perhaps even one from MAS. He stated that the communication with MH370 had been noisy with static interference (a normal occurrence in aircraft communication) and what he believed to be 'mumblings'. But MAS has come out to deny any MAS pilot had been in contact with the pilots of MH370.

That pilot did everyone a disservice by insisting on remaining anonymous, which is MOST unusual for a professional pilot in such a life-and-death situation, and which has led me to believe it's just plain bullshit.

The next phase is ALERTFA or Alert Phase when those nascent doubts mentioned in INCERTFA above have then developed into concerns, or when the operating efficiency of the aircraft has been believed to be impaired though not to the extent of requiring immediate assistance or imminent danger.

At this stage, Search & Rescue (SAR) authorities would usually initiate communication searches (including checking with Chinese aviation authorities regarding Nanning airport where it was rumoured that MH370 had landed, or with the Vietnamese DCA on any likely Vietnamese airports where it might have) and make preparations to search.

The final stage is DETRESFA or the Distress Phase where there is now certainty that the missing aircraft MH370 was in imminent danger ('imminent danger' is a technical term), and where communication and other forms of investigation have failed, as mentioned, like checking on Nanning airport etc.

Usually, in the absence of any reliable information like a distress call (either by MH370 or a relay by another aircraft or ship or ground observer), or a found crash site (whether on land or sea), the DETRESFA would have been declared at the end of the aircraft’s fuel endurance, or even earlier as assessed by the search authorities.

Unfortunately all these steps take time - maybe 5 hours or even more. Aviation authorities around the world don't make knee jerk reactions to the way my reader had wanted of the Malaysian DCA or MAS, because they (DCA, MAS) didn't have the advantage of armchair hindsight like my reader has.

They couldn't simply press the panic button PREMATURELY and scare the shit off everyone's pants especially the NOK of the passengers and crew. There have been cases where such premature and false alarms had been more harmful than helpful. All these incremental SAR action-stages have been developed by aviation experts after distilling years of experience shared worldwide.

There are set professional procedures to be followed which in MH370 case would have included pre-search cross checking with various authorities along the route of MH370, to wit, Vietnam, China and more if necessary.

That MAS and the DCA have even scoured the Straits of Malacca have been an indication they covered every possibility including the highly unlikely probability of MH370 flying in the opposite direction, not when it's equipped with modern navigational aids and that it was already reported over the South China Sea off our peninsula east coast.

But desperate for information, they did the desperate act. I can't blame them for covering every conceivable angle including the 'backyard'.

As mentioned, already a multinational search force comprising dozens of aircraft and ships have been searching the suspected areas and it's only today that Vietnamese authorities claimed its navy has found fragments believed to be the composite inner door and tail section of the B777 about 50 miles south-southwest of Tho Chu island.

UPDATE: Reports on debris of missing aircraft not true, says civil aviation chief who said Vietnamese authorities has denied it.

The mysterious disappearance of MH370, while already being suspected of crashing somewhere, has confounded worldwide aviation experts, who offered a variety of possibilities but no definite answer.

Let's not muddle the sad tragedy further by politicizing it with extreme toxic prejudice.
Posted by KTemoc at 10:14 am