Do you remember when Princess Reformasi was under siege in early November 2012 for allegedly expressing her support for freedom of religion for all Malaysians, including Malays, in a forum titled “Islamic state? Which vision? Whose responsibility”?

Sweetie was so reported by FMT in its news article Nurul Izzah backs religious freedom for all.

Needless to say, UMNO jumped eagerly on her alleged statement, with another sweetie, deputy minister Mashitah Ibrahim out to get her in some legal way, while Dr Mahathir also criticized her for her alleged unIslamic statement.

A few days later, Tian Chua's Malaysian Chronicle had then came out with an article titled Nurul is an Angel in our midst. Mashitah Ibrahim, you are a spinning pathological liar wakakaka.

I wonder whether the Malaysian Chronicle had upgraded or downgraded Nurul from Princess Reformasi to Angel, wakakaka.

But the poor sweetie was so stressed (panicked?) by the UMNO mob against her that she sought help from Dr Asri, while PAS' Dzulkefly Ahmad, then still an MP, was reported by the Malaysian Chronicle (wakakaka) for criticizng sweetie Mashitah Ibrahim as being ‘diabolical’ in attacking sweetie Nurul.

Naturally sweetie Nurul denied supporting apostasy and, I believe, went on to sue Utusan Malaysia and Berita Harian for allegedly twisting her words.

Now, the person who asked her the question which led to the alleged controversial statement was none other than sweetie Siti Kassim, a member of the Bar Council human rights committee and Orang Asli rights advocate.

In the midst of the UMNO-generated brouhaha over Nurul's alleged statement, Siti Kassim came out to say that she was disappointed with Nurul for backing away from her statement that freedom of religion was a right for all including the Malay-Muslims. She lamented that Nurul has failed to stand firm on her remark.

Siti Kasim said: “I believe Nurul was just trying to impress the people. She didn't think of the consequences. There’s nothing wrong about it [freedom of religion], she is saying the truth. I expected a hoo-ha after that. But as a politician, you just need to stick to the truth."

I had then written: Hmmm, maybe Nurul indeed wanted to impress her audience but alamak, Siti, cut her some slack lah as Nurul is still young and really, a babe in the political woods. Besides, to a Muslim, apostasy is an extremely serious issue, where the punishment could well be death (though of course the authorities won't go to that extent in Malaysia).

Well, we hear once again about sweetie Siti. In today's Malaysiakini Angry crowd tries to barge into court, a report on the court hearing on the never-ending dispute between the Catholic Church and the Home Ministry, she (Siti, not Nurul, wakakaka) was reported as being present outside the court together with various other mobs, wakakaka, but wearing a striking black T-shirt that bore the words, "Almighty Allah, Allah - Lord of the whole world", and holding a bouquet of chrysanthemums. 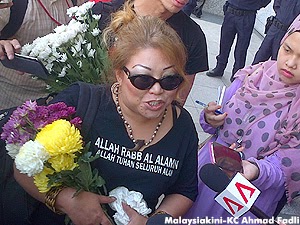 Malaysiakini reported: Siti explained that her presence in court along with four others was to show the alternative views of other Malays, those who do not support the use of the word "Allah" as exclusive to Muslims in Malaysia.

Siti, while I've been one of the very few (only one?) non-Muslim who refused to support the Church's insistence on using the Allah-word, I have to salute you for your courage, resolute and personal integrity in holding on to your values, principles and amazing inclusiveness.

You are the real Princess Reformasi.

Sorry Nurul, wakakaka. And sorry too, Mashitah, you don't qualify by a zillion kilometres, wakakaka.

“I [Siti Kassim] am here, along with a few other individuals to give out flowers as a symbol of peace which is reflective of Islam. We are not here to antagonise but just like these fellows out here, we have a right to express our opinion as well,” said Siti who was leading a group of more than 20 individuals from all ethnicities.

She pointed to her t-shirt which has the words: “Allah hu rabbi al amin” (Allah is the universal God) and stated that this is the true meaning of Islam, where Allah belongs to all.

“I would like to call out to all Malay Muslims, don’t let these people taint your akidah. Read the Quran and if you have your beliefs, don’t be afraid to speak up and voice it out. It’s time we, the unrepresented Malays, represent ourselves,” said Siti.

In the middle of her explanation on the meaning of “akidah” (faith), she was interrupted by an unnamed Egyptian chap who asked her what her interpretation of akidah is, to which she replied that she was not there to give out lectures but to show support for the Christians.

She was then immediately interrupted by Persatuan Muka Buku Penang (Penang Book Cover Association) chairman Salleh Ismail who blasted her in public, accusing her of “offending” and “provoking” the gathered protesters who easily numbered nearly a thousand.

“You say you are not here to antagonise anyone but your words and actions are very provoking and offensive. What is your understanding of akidah? You tell me now,” he questioned aggressively.

Siti then tried to calm Salleh down and handed him a flower while he tried to refuse her gift.

Calling him brother, Siti then tried to explain her position before the spat was broken up by the police, who quickly ushered Siti into the courthouse while taking an agitated Salleh to one side.

“She’s a murtad. She’s already a murtad,” said the 34 year old Salleh who arrived here this morning at 5.30am via bus.

Murtad is a Muslim term for an apostate.

Later, Siti told fz.com that she expected that kind of behaviour from the NGOs supporting the call that Allah cannot be used by non-Muslims in Malaysia.

“Of course I expected it. They need to learn to take a chill pill. It seemed today carrying flowers is more dangerous than carrying weapons. People fear flowers more than weapons.

“As for him calling me a murtad, only Allah knows my faith. And if his claims, that I am murtad are published, I believe I can sue him for slander or defamation. But I need to check on the legalities of it all,” said Siti.