Relative of drone strike victims: "Why did they kill our family... our children?"
A US drone strike near Kabul airport ended up killing 10 members of one family, including six children, surviving relatives have told the BBC.

The 10 were killed when a car parked at their home was struck by an explosion on Sunday.

The US military said it was targeting a vehicle carrying at least one person associated with the Afghan branch of the Islamic State group.

It said people nearby may have been hit in the aftermath of the strike.

The youngest child to be killed was two-year-old Sumaya, and the oldest child was 12-year-old Farzad, the family said.

"It's wrong, it's a brutal attack, and it's happened based on wrong information," Ramin Yousufi, a relative of the victims, told the BBC.

He added, tearfully: "Why have they killed our family? Our children? They are so burned out we cannot identify their bodies, their faces."

Another relative, Emal Ahmadi, told the BBC that it was his two-year-old daughter who was killed in the strike.

Mr Ahmadi said he and others in the family had applied for evacuation to the US, and had been waiting for a phone call telling them to go to the airport.

The US, Mr Ahmadi added, had made "a mistake, it was a big mistake". 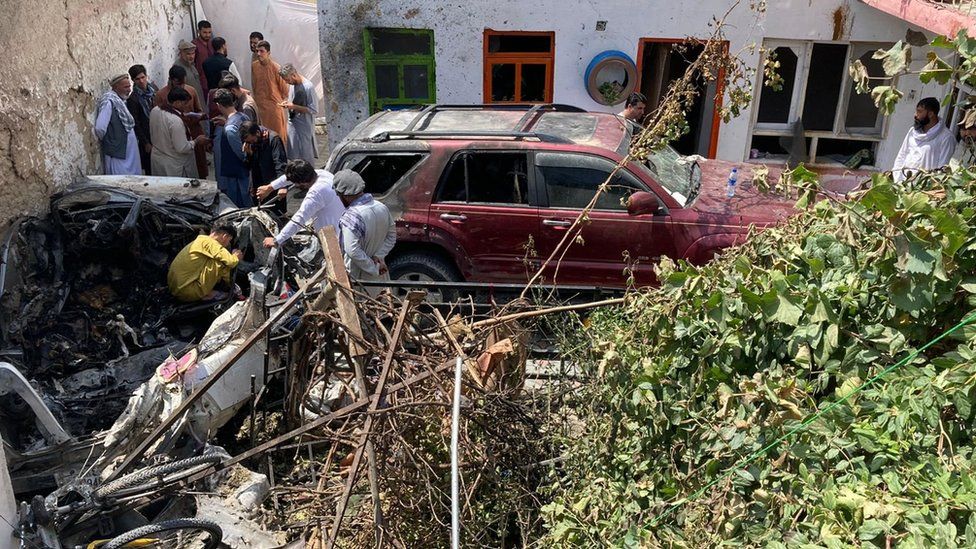 image caption
The aftermath of the drone strike in the Afghan capital, Kabul
Pentagon press secretary John Kirby told reporters that they were "not in a position to dispute" reports of civilian casualties, and that they were "assessing and... investigating".

"Make no mistake, no military on the face of the earth works harder to avoid civilian casualties than the United States' military, and nobody wants to see innocent life taken," he said. "We take it very, very seriously and when we know that we have caused innocent life to be lost in the conduct of our operations, we're transparent about it."

He then defended the intelligence about "what we believed to be a very real, a very specific and a very imminent threat" against Kabul's Hamad Karzai International airport from IS-K (Islamic State Khorasan Province), IS's Afghan affiliate.
In an earlier statement, US Central Command said there had been a number of "substantial and powerful subsequent explosions" following the drone strike.

It said the explosions suggested there had been "a large amount of explosive material inside, that may have caused additional casualties".

Central Command had previously said the strike was successful at "eliminating an imminent" threat to Kabul's airport.
Posted by KTemoc at 1:00 am