The UEC is for passing a standardised test for Chinese independent high school students organised by the UCSCAM (United Chinese School Committees Association of Malaysia) since 1975. Wikipedia informs us that the UEC is available in three levels: Junior Middle (UEC-JML), Vocational (UEC-V), and Senior Middle (UEC-SML).

This Malaysian Chinese educational Certificate is accepted by overseas countries such as the UK, USA, Canada, Australia, NZ, etc on top of Chinese speaking nations like China, Hong Kong, and Taiwan. 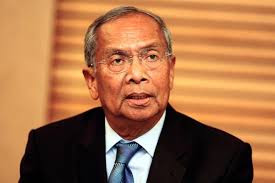 It seems that the only country not accepting the UEC is Malaysia, thus it hasn't been at all surprising that we just heard Putrajaya has jerked the rug off from beneath Adenan's feet.

“Unimas, being a public university under the jurisdiction of the Higher Education Ministry, is obliged to follow directives from the ministry regarding the national education policy towards UEC and also the current admission requirements to public universities set by the ministry" ...

... which essentially means no entry to UEC holders.

And why has the Malaysian government been so against the UEC?

According to deputy education minister P Kamalanathan, he of the kissy-hand-some bloke, wakakaka, the government’s refusal to recognise the UEC was due to issues of 'national sovereignty'.

'National sovereignty', wow, and that's even when our country now have so many international schools using English (or other foreign languages) as its medium of instruction and foreign-run universities, colleges and schools.

But MCA president Liow Tiong Lai told off Kissy-Hand-some Kamala, saying the issue of 'national sovereignty' was not even mentioned in the cabinet so how could a deputy minister announced that in parliament as if it was a government's policy stand when a full minister hasn't heard of it?

“I wonder whether he [Kissy-Hand-some, wakakaka] knew what he was talking about. While it is acceptable that for now, the government does not recognise UEC because it does not fall squarely within the national curriculum and education policy, I cannot understand how is it related to national sovereignty."

“It was said that the government’s stand was based on a cabinet decision on November 6, 2015" ...

... but as we know, Liow Tiong Lai has said there wasn't such a cabinet discussion.

It seems the Malay-dominated government is determined, whatever, however, as ever*, to not recognize a Unified Chinese educational certificate which has already been recognize by 400 foreign tertiary educational institutions throughout the world, including universities in France, Germany and Russia, let alone the UK, USA, Canada, Australia, NZ and Chinese speaking nations like China, Hong Kong and Taiwan.

* Yes, as ever, because it all started back in 1975 with Mahathir, when he was Education Minister, He threatened the Chinese educationists about issuing the UEC.

Dr Kua Kia Soong enlightened us on the UEC via the FMT:

The litany of reasons given by the government for not recognising the Unified Examination Certificate (UEC) through the years gets more and more bizarre.

They used to say that the UEC’s curriculum was not up to mark. The latest reason is the answer given by Deputy Education Minister P Kamalanathan in the Dewan Rakyat that the Cabinet, in a meeting on Nov 6 last year, had decided not to recognise the certificate.Dr Kua quoted Kissy-Hand-some Kamala saying:


“For now, the government can’t recognise UEC as it is not based on the national curriculum and education philosophy. This is a reality that needs to be accepted as it’s related to the nation’s interests and sovereignty.”

Dr Kua also went back into history to inform us that Mahathir was the man who first threatened the Chinese schools on the UEC and warned them not start this private line of educational accreditation.

At independence in 1957, there were 86 Chinese secondary schools in Malaya.

It was only after the 1961 Education Act that many of these schools were forced to become English-medium (yes, not Malay-medium) at the time. Only 14 Chinese secondary schools remained as “independent” schools.

It was after the “Independent Schools’ Revival Movement” in the 1970s that the number of MICSS climbed to 60 schools.

In 1975, when the MICSS decided to hold its first Unified Examination, the Chinese education leaders were summoned to Parliament by then Education Minister Dr Mahathir Mohamad and were told in no uncertain terms to cancel the examination “or else…!”

The Chinese education leaders carried on regardless of the consequences and the UEC has been held every year since. To date, there has never been a leak in any UEC examinations and the curriculum and marking of exam scripts are carried out every year with professional precision.

Finally, Dr Kua gave a flying kick into the face of our so-called Education Ministry by telling us:

Does UiTM violate national sovereignty? This Bumiputeras-only policy definitely violates the International Convention for the Eradication of Racial Discrimination (ICERD).

Strangely thus far, the DAP has been unusually quiet on Putrajaya's rejection of Adenan's recognition of the UEC, though just last month Lim Guan Eng has urged Adenan to hire Unified Examination Certificate (UEC) holders for the state civil service. We'll have to see how sincere Adenan is.

But to recapitulate, it started with Mahathir's very very strong and fierce opposition against the UEC, and which now is still perpetuated by his 'UMNO-descendants', with Kissy-Hand-some Kamala being the front spokesman for the government's anti-UEC stand.

Maybe UMNO is just jealous of the performance, standing and credibility of the UEC.