I have a story to re-tell, or rather re-tell because I have told this before. 'Tis my Uncle's story, one about the busuk hati of an UMNO man. But let us first review the situation in Sarawak between PKR and DAP. 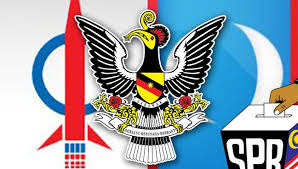 The Malay Mail Online reported today that DAP's Anthony Loke insisted that PKR was the one that reneged on the seat talks and revealed details of the negotiations to prove its claim.

He also revealed that during negotiations, DAP and PKR had engaged pollster Merdeka Center to conduct a survey on six of the 11 seats that both parties had been eyeing for the elections.

According to Loke, the pollster’s findings favoured the DAP in all but one of the surveyed constituencies.

But at the close of nominations yesterday, PKR and DAP were seen pitted against one another in six seats, namely Mambong, Simanggang, Murum, Mulu, Ngemah and Batu Kitang.

In an earlier report it was said that PKR's Tian Chua had been the one who insisted on the Merdeka survey but when he discovered that the pollster's findings favoured DAP in most of the disputed seats, he reneged on the agreement.

Needless to say, Azmin Ali was right behind him. Azmin of course has now placed the blame in Bian Baru, saying the PKR state leader has autonomy in deciding where to stand, notwithstanding the two party had signed agreement on seat sharing-allocation.

This is sheer bullshit as PKR is known as the party which is obsessed by centralized control from KL - for PKR under Azmin Ali, there is no such words as 'autonomy' for the state branch - we witnessed that in Sabah.

Besides, I've read Rafizi Ramli and Xavier Jeyakumar saying Wan Azizah is the only one in PKR who has the authority to sign off candidates for the Sarawak elections, and that she has NOT assigned her powers to anyone.

Azmin claimed he made the decision based on the mandate given to him by party president Dr Wan Azizah Wan Ismail to settle the seat negotiation disputes.

"I was given the mandate in writing by the president to resolve all outstanding issues concerning the state election, including seat allocations and the candidates," he said at a function in Shah Alam today.

"I was given the mandate by the party. Can you question it? You should not question it," Azmin added.

However, he could not remember when Wan Azizah gave him the mandate.

Another Malaysiakini report tells us:

PKR deputy president Azmin Ali was alleged to have authorised Sarawak state chief Baru Bian to issue appointment letters to the candidates of the five contentious seats. This is according to a party source.

This was against the decision of party presidential council, which only authorised 35 candidates to stand in the May 7 state election.

This may see three-cornered fights in five state seats - Mambong, Simanggang, Ngemah, Murum and Mulu - where DAP will field candidates.

"Azmin gave the impression to the state PKR that he could push it at the central level to allow three-cornered fights with DAP in Sarawak," said the source.

He then claimed both Azmin and party vice-president Tian Chua instigated Sarawak PKR to take a hardline stand with the excuse that this would force the party and DAP to re-open negotiations. [...]

The source, however said the party president, who signed the appointment letter for 35 candidates, had turned down the request for three-cornered fights.

"The only one person authorised by the party to sign the appointment letters was Wan Azizah," said the PKR leader.

"She had dealt with the recent developments nicely, she had put her feet down and made it clear that she would honour what has been agreed," he said.

"Thus, even if Baru Bian wanted to issue the appointment letter to five candidates, it is not a valid one," he said.

"The candidates using his signed appointment letter may be disqualified on the spot. They will not stand on PKR's ticket," he said.

But DAP in a bid to maintain Pakatan cohesiveness against BN, had originally surrendered Batu Kitang (a DAP sure-win seat) to PKR despite the polling showing 60% of the voters favoured DAP while only a measly 8% will vote for PKR. I'll bloke on why DAP has been so accommodating to PKR, possibly in the next post.

Oh oh oh, do you know what happened when the nomination for the PKR candidate in Batu Kitang was being submitted?

Her proposer was found to be an alleged bankrupt, which would have automatically invalidated her candidacy, and gave the DAP blue-ribbon seat to the BN without even a fight.

What was PKR up to, in having an alleged bankrupt as a proposer to a PKR candidate in such an important sure-win seat?

I have my theory but first please read this FMT news item published yesterday, as follows:

KUCHING: The on-going feud between DAP and PKR over seats both parties were eyeing in the Sarawak election took an interesting twist this evening.

“PKR’s proposer was found to be a bankrupt. That’s why there was a delay in the announcement of the candidates.

“If that had happened, it would have given BN a walkover victory in the seat where past results had shown more support for DAP.”

Voon’s nomination was only formalised at 11.30am after the returning officer decided to vet the application of the candidate.

Chong took PKR to task over Voon’s nomination, wondering why the party gave the returning officer the opportunity to almost reject the nomination.

“PKR has to answer to the voters in the area as to the reason why it had fought so hard for the seat and yet created such an opportunity for BN to win uncontested.

“As it turns out, fielding our candidate there was the right decision.”

DAP made a last-minute decision to field Abdul Aziz Isa in Batu Kitang, instead of Stakan, as was originally planned, as PKR had refused to reveal five out of its 40 seats.

DAP had warned PKR it would renege on the agreement if the latter decided to ignore the pact.

I wonder whether the EC returning officer would have been that generous if the DAP candidate had made the same mistake.

If the PKR candidate had been disqualified as she should have been, that would have left the Batu Kitang election a straight fight between the BN and DAP, plus a couple of kutu parties or idnependents, but with the kind generosity of the EC returning officer, there will now be a three-cornered fight, chiefly among BN, PKR and DAP - what a wakakaka!

By the way, PKR is now considering legal action against the DAP Sarawak Chief for the above, claiming it's libellous to say the proposer for the PKR candidate was a bankrupt. I await eagerly for this.

In my assessment, PKR knew it would not have won Batu Kitang even with DAP surrendering the seat to it on a silver platter because the pollster findings concluded that PKR could only draw 8% of the voters (DAP polled as winning more than 60% of the votes), thus meaning BN will have around 35 of the votes, a far better chance than PKR.

DAP giving way to PKR doesn't automatically ensure PKR receives the windfall of votes from DAP supporters as in Sarawak there is real bad blood between the two Pakatan so-called allies. It wouldn't be surprising if most of DAP supporters will vote for BN just to spite PKR.

But then, why is PKR so adamant on seizing those seats which have overwhelming DAP supporters, and ones which will unlikely be won by PKR, and as alleged above, nearly losing Batu Kitang, a DAP blue ribbon seat, to BN 'ere the state election begins.

Now, let me bring in my Uncle's story. Years years ago, perhaps during Tun Razak's time or perhaps later, Parliament was debating on the (lack of) effectiveness of the NEP, in particular on higher education and the claimed lack of Malay professionals in medicine, dentistry, law, engineering, etc, in comparison to the nons.

One UMNO MP stood up to say that the Malays would continue to face difficulties catching up with the nons with only the use of the NEP and their near monopoly of Malaysian universities (in those days I think there were only 3, namely, UM, USM and UKM), unless the government also restricted/prohibited the nons from going overseas to study at foreign universities. If you check the Hansard, it's there.

'Twas fortunate for the nons that the PM then and his cabinet were not into that ultra racist draconian proposal, though years later we saw its manifestation in the questionable and sudden de-recognition of the Crimea Medical College when an UMNO minister questioned, words to the effect: "Why are there so many blacks here?"

That Crimea Medical College was recognized for a period which did not disadvantage the Malays who went there first but alas, only the Indians who followed them subsequently in droves.

And annually we've also heard of nons (despite their excellent educational records) having difficulties in joining degree courses of their choices like medicine, law, engineering but who would be shunted off to less desired study areas.

Some years ago, when the issue of entry into medical degree courses was the hot topic we had a Malay doctor who wanted to introduced a 'blood test' to see whether applicants for the course could stand the sight of blood. Was he himself subjected to such a test as an applicant? What f**king nonsense!

Then we learnt that excellent exam results per se were not good enough but the applicant must also have all sorts of achievements like performance in civic duties, sports, etc, all of which (except exam results) would be subjected to near subjective assessments.

For f**king decades, our best doctors, engineers, graduates were all processed into local and overseas universities solely on their exam performances. Have we detect any deficiency in the performance of those graduates of earlier years? OK, I won't comment on today's graduates.

Alamak as usual I have digress a wee bit, wakakaka, but anyway, to summarize the sinister stealthy strategy, it has been one of 'promote & suppress', that is, promote the favoured and suppress (or disadvantage) the others so that all professions will see at least a staffing of 65 to 75% by the Chosen Ones, save for the MCS, Armed Forces , Police, so on so forth.

I suspect that might have also been the covert objective, to suppress and ensure DAP does NOT become the dominant partner in Pakatan, thus on this argument, it would have been better to lose a seat like Batu Kitang than to even contest it (but only after seizing it from DAP) and to kacau DAP in other likely winnable seats.

At least it has to be acknowledged that during Anwar Ibrahim's days, in this respect he wasn't that bad as he looked only at the big picture, one which saw him as PM, wakakaka. Thus he wanted to ensure there was peaceful cohesiveness among Pakatan members for his march to Putrajaya. Gosh, I'm missing him already, wakakaka.

But what next for PKR and DAP in Peninsula, in Selangor, Perak, NS and Penang? Interesting times lie ahead.