Return of Ezam Mohd Nor to PKR? 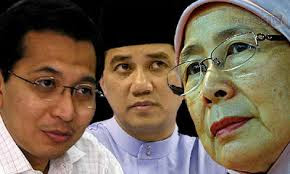 Ezam was once Anwar's right hand man while Azmin was the one on his left. But Ezam left in acrimony and returned to their Mothership* where he was made a senator.

* that of Anwar & Azmin as well - I won't be surprised when, not if, Azmin returns to UMNO

It was said Ezam left PKR with a huff and a puff because Anwar's left hand man, Azmin, manipulated De Facto Boss into a tiff with him, which then saw Ezam exiting PKR, wakakaka.

But it's quite amazing that now Wan Azizah has allegedly turned to Ezam to rescue her faction from Azmin.

If above is true and Wan Azizah succeeds in recruiting Ezam back into PKR, I wonder how Pakatan can cope with Ezam, a bloke who had made very serious anti DAP statements before.

In late 2011, the blog Malaysians must know the truth posted this (extracts only follow):


This Ezam Mohd Nor is spewing loads of rubbish again, and of all people, to students of the UIAM.

In the first instant, how on hell was he, a politician at that, be permitted to address students and to speak about politics and claiming that there are Malay traitors in our midst working in cohort with the DAP “bent on destroying the multi-racial foundation of Malaysia so it can turn the country into another Singapore”.

Here, I would just like to ask – who are the Malay traitors that Ezam is referring to? Was he referring to any particular personality in the opposition? And why wouldn’t he name that person out loud and clear? Are you too afraid Ezam?

The word traitor is a damning word to use upon someone, and if I were to call Ezam a traitor for having jumped the UMNO boat onto the PKR boat, and soon after back into UMNO’s boat, would Ezam like it?

And you know, I am still waiting for the many boxes that reportedly hold the many mysteries of UMNO’s corrupt practices that Ezam had promised to expose when he was in PKR. Till this day, the boxes are nowhere to be seen, and would you still believe in Ezam?

Mind you, even if Ezam is back in PKR, the anti DAP camp in that party is already brimming full, as we have seen in Nathaniel Tan's recent shameful bullshit against Lim GE in Malaysiakini [though Nat Tan is currently at odds with some (Anwar) in PKR, he's still at heart very much a PKR disciple].

To review the Ezam character, let's read what Malaysiakini's Ahmad Kadir wrote of Ezam in 2009 (extracts only), and most uncomplimentary if I may say:

Ezam Mohd Noor was the most juvenile and vulgar element of PKR during thereformasi years. He called Tun Dr Mahathir Mohamad unprintable names. All is captured in video and writing. Why was Ezam behaving like this? The reason is because he didn't have higher ideals.

He was literally worshiping Anwar Ibrahim. He was a young man who was angry that he was ejected out of power. Of course, he didn't have power but walking on the red carpets laid down for Anwar was too tantalising.

Ezam paid the price for his Anwar worship and went to jail. [...]

Ahmad Kadir then continued with how Anwar discarded Ezam when he was released from prison by AAB:

He [Anwar Ibrahim] started rebuilding a tattered party, building alliances, bridging gaps and formulating policies. It was here that Anwar was forced to choose his soldiers wisely.

Having learnt from his 1998 episode, he became stealthy and very cautious. Though accommodative to all, he trusted few. Despite going to jail for his worship, Ezam was not part of the trusted lieutenants in the new era despite being one in the past. Though I'm not a PKR member, I generally support PAS and PKR and have many good friends in both parties.

A highly placed PKR man told me: ‘Anwar opted for cautious people like him and it was here that Azmin Ali carried the day.’

Ezam quit PKR. As we remember, he said Anwar was ‘a dictator’ and Azmin Ali a chief manipulator (in that he manipulated Anwar into becoming his right hand man - a job Ezam wanted).

During the Permatang Pauh by-election, Ezam reveals his inherent jealousy and said: ‘I have not been accommodated in PKR as I wanted which I suffered for.’ No need to explain this.

Has Wan Azizah's alleged approaches to Ezam been approved by Anwar?

But PKR is showing its true colours as ever, an unchanging taxi sapu right to its very end.