Have Malaysian Islamic officers been Islamic?

Do you remember who Siti Kasim is?

Well, in case you don't and in order to recall who she is, let's go back to early November 2012 and review the dastardly awkward situation of Princess Reformasi (the 'so-called', wakakaka) when she was under siege for allegedly expressing her support for freedom of religion for all Malaysians, including Malays, in a forum titled “Islamic state? Which vision? Whose responsibility”?

Sweetie was then reported by FMT as Nurul Izzah backs religious freedom for all in which she had said:

Freedom of religion should be applied equally to everyone in the country including the Malays and that there should be no compulsion in any religion including Islam.

How can anyone say (freedom of religion) only apply to the non-Muslim, it has to be applied equally.

In Quran, there is no specific term to the Malay as how it should be done.

Needless to say, UMNO had then jumped eagerly on her alleged heretical statement, with another sweetie, deputy minister Mashitah Ibrahim out to get her in some legal way, while Dr Mahathir also criticized her for her alleged un-Islamic statement.

A few days later, Tian Chua's Malaysian Chronicle had then came out with an article titled Nurul is an Angel in our midst. Mashitah Ibrahim, you are a spinning pathological liar wakakaka.

I wonder whether the Malaysian Chronicle had upgraded or downgraded Nurul from Princess Reformasi to Angel, wakakaka.

But poor sweetie Nurul was so stressed by the UMNO mob against her that she scurried off to seek help from Dr Asri, while PAS' Dzulkefly Ahmad, then still an MP, was reported by the Malaysian Chronicle (wakakaka) for criticizing sweetie Mashitah Ibrahim as being ‘diabolical’ in attacking sweetie Nurul. 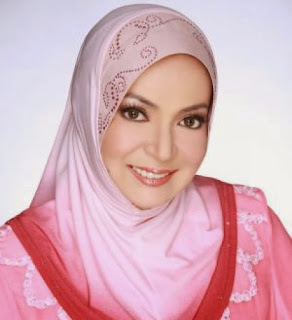 Now, the person who asked Nurul to clarify the latter's flamboyant statement which led to the alleged controversy was none other than sweetie Siti Kasim, a member of the Bar Council human rights committee and Orang Asli rights advocate.

Subsequently, in the midst of the UMNO-generated brouhaha over Nurul's alleged statement and belakang pusing, Siti said she was disappointed with Nurul for backing away from her statement that freedom of religion was a right for all including the Malay-Muslims. She lamented that Nurul has failed to stand firm on her remark.

Siti Kasim said: “I believe Nurul was just trying to impress the people. She didn't think of the consequences. There’s nothing wrong about it [freedom of religion], she is saying the truth. I expected a hoo-ha after that. But as a politician, you just need to stick to the truth."

I had then written: Hmmm, maybe Nurul indeed wanted to impress her audience but alamak, Siti, cut her some slack lah as Nurul is still young and really, a babe in the political woods. Besides, to a Muslim, apostasy is an extremely serious issue, where the punishment could well be death (though of course the authorities won't go to that extent in Malaysia).

Two years later, in March 2014, we heard once again from sweetie Siti. In Malaysiakini's Angry crowd tries to barge into court, a report on the court hearing on the never-ending dispute between the Catholic Church and the Home Ministry, Siti was reported as being present outside the court together with various other mobs, wakakaka, but wearing a striking black T-shirt that bore the words, "Almighty Allah, Allah - Lord of the whole world", and holding a bouquet of chrysanthemums.

Malaysiakini reported: Siti explained that her presence in court along with four others was to show the alternative views of other Malays, those who do not support the use of the word "Allah" as exclusive to Muslims in Malaysia.

Now, while I've been one of the very few (only one?) non-Muslim who refused to support the Church's insistence on using the Allah-word, I saluted Siti for her courage, resolute and personal integrity in holding on to her values, principles and amazing inclusiveness.

I had then stated she has been the real Princess Reformasi.

Sorry Nurul, wakakaka. And sorry too, Mashitah, both of you don't qualify by a zillion kilometres, wakakaka.

Said fatwa was apparently gazetted in 1996 prohibiting Muslim women from joining beauty pageants. The fatwa came to light in 2013 when four Muslim contestants were dropped from the Miss Malaysia World 2013 beauty pageant and investigated for breaching the National Fatwa Council’s edict.

My Uncle had a good laugh on reading this as he recalled the days when Harun Idris was MB of Selangor and the organizer of a Miss Universe Malaysia contest in KL. There was a hue and cry about the contestants wearing bikinis so clever Harun had them wearing a sheer transparent nightgown over their bikini-ed bodies which hid nothing and in fact made them look even more alluring, wakakaka.

Just my usual wee digression at this stage - Today Mariam Mokhtar wrote in FMT's Those who think they hold keys to paradise the following:

Some religious officials make bad preachers. They try to force others to do things against their will and threaten and belittle them.

Sadly, some Muslims would not seek knowledge to verify facts because it is far easier to be told what to do.

A recent article written by Perak Deputy Mufti Zamri Hashim and published in Berita Harian has got a lot of people bristling. Essentially, he said men who “lose control” of their wives and daughters – like allowing them to go out of the house exposing their aurat – are “dayus,” which can be translated as “cuckolds.”

An Islamic scholar who read the article dismissed it as “rubbish, a pack of lies.”

One Muslim woman said Zamri was being irresponsible, encouraging men to use force on the women in their lives. “This is a blanket order for men to control their wives and daughters,” she said.

Another woman said, “It’s clear whom his message is for. He is scolding Malay women for taking part in beauty contests. And he’s telling them off for doing male dominated jobs. He’s scared to tell the women, so he does it in a roundabout way and targets husbands and fathers.

“Zamri tells the man that if he does not control his wife or daughter, then he is weak and unmanly, but worse still, he will be excluded from paradise.

“The sad thing is that some people who do not know their religion well enough will believe him. This is wrong. It is deceiving. It is not Islamic.”

And Mariam posed this interesting question: What would be Zamri’s response to the girl who disobeys her father and fights him off when he tries to take sexual advantage of her? Who is the sinner here? Will she be excluded from heaven?

Well, back to our sweetie Siti - she condemned those JAWI officers for raiding a closed door dinner party at a hotel without legal warrant and without the mandatory police presence and for illegally detaining the event’s transgender organiser.

Siti told the Malay Mail Online : “The [JAWI] officer told me that it’s against the law to have a beauty contest — it’s ‘haram’ in Malaysia, based on a fatwa.”

But she stated: “It’s not a real beauty pageant, it’s a show.”

According to the Malay Mail, 10 JAWI officers, together with the media, came to the hotel at about 10 pm yesterday and prevented people from leaving the dinner that had about 200 transgender guests.

According to the lawyer [Siti], the religious authorities did not have a warrant and were unaccompanied by the police.

Siti said she called the police and that after they came, the guests were allowed to leave. However, JAWI officers took her and the event organiser to the Dang Wangi police station.

According to Siti, JAWI officers later denied at the police station that she was under arrest, but accused the event organiser of organising a beauty contest that was against the 1996 religious edict, which has been gazetted as law, prohibiting Muslim women from joining beauty pageants.

But Siti reported rather succinctly: “If they say these people are not women, then why are they coming in?” wakakaka.

She also said she was considering suing JAWI for wrongful arrest after the religious officers took her to the police station in their van.

Our nation's salaried religious officers are becoming far too arrogant, raiding private functions without legal warrant nor the mandatory police presence they were supposed to have.

BALING, April 7 — A Form One girl from a school here claims she fractured her right hand while trying to defend herself when a teacher repeatedly hit her with a chair last Monday.

Farah Izzati Mohd Rohaizad, 13, said in the 8.30pm incident, she and her friends, Siti Farhana Mohd Ayub, 13, and Irdina Safiyya Amran, 13, were called by an ustaz to the dining hall to recite the Quran.

She said as she was taking a chair nearby, the ustaz suddenly threw a plastic chair hitting her at her waist.

“Later when the ustaz found there was no Quran in front of me, he hit me twice on the head with a chair but I raised my hand to fend off the blows which left two bones on the back of my right palm to be fractured,” she told a press conference here yesterday, adding she sought treatment at the Baling Hospital.

Meanwhile, Farah Izzati’s father Mohd Rohaizad Abdullah, 36, said he was saddened by the incident, adding that he had lodged a police report yesterday.

Baling district police chief, Supt Shariffudin Yusof confirmed receiving a report on the incident and that the case was being investigated.

Alhamdulillah, I'm glad I'm not a Muslim to suffer the unjust bullying iniquities of these so-called men of the cloth.