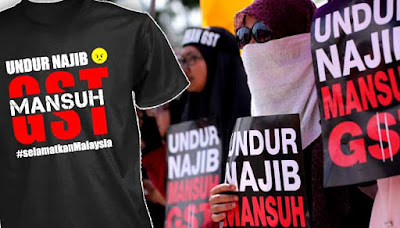 Misalnya, back in 1969, someone lost his election in the constituency of Kota Setar Selatan and blamed the Chinese.

In fact that someone, wakakaka, had prior to the election said arrogantly he didn't need the Chinese votes. So okaylah, the Chinese 'tremblingly obeyed' (wakakaka) and did what he wanted, that was, doing the unthinkable for Chinese at that time, voted instead for the PAS candidate Yusof Rawa.

And the bizarre thing is that someone was pissed off with the Chinese in Kota Setar Selatan constituency for 'tremblingly obeying' him, wakakaka.

And he never forgave them and probably still hasn't, wakakaka.

Indeed, six years later in 1975 when he was Education Minister, he summoned the Chinese education leaders (MICSS or Malaysian Independent Chinese Secondary Schools) to his office in Parliament and threatened them against holding the Unified Examination Certificate (UEC).

According to Dr Kua Kia Soong, Mahathir told them in no uncertain terms to cancel the examination “or else …!”


Then in 2008 and 2013 when they voted for the Anwar Ibrahim-led Pakatan they were once again blamed, with post-thunderstorm mushrooming of strident abuses such as 'Apa lagi Cina mahu', 'the Chinese are ungrateful', 'the Chinese as kingmakers want to rule the country', etc.

23% Chinese in Malaysia as kingmakers against 65% bumiputeras? And if they have been or still are, guess who is at fault? How did the EC turn around 60-ish federal constituencies into holding voter racial makeup of approximately 63:35 Malay:Chinese ratio? Wakakaka.

Anyway, before I give you heart attacks with my dodgy Bahasa, wakakaka, let's return to our FMT headlines, wakakaka.

As usual there are enterprising businessmen who make business hay while the protest sun is shining, so we are told by FMT that T-shirt sellers and drink vendors thronged the area outside Dataran Merdeka today along with the thousands of protesters ........ Many were selling T-shirts emblazoned with “Mansuh GST” (Abolish GST) and other slogans.

While at least one bloke made RM2000, FMT stated other sellers complained that the surprisingly low turnout of Chinese protesters at the rally affected sales.

“Usually it’s the Chinese who buy our vuvuzelas,” another seller ... said.

But WTF, why didn't those orang Tionghua turn up, at least to buy the T-shirts and vuvuzelas if not to protest, wakakaka. 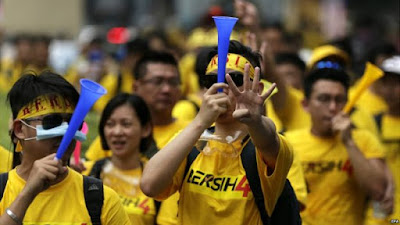 The T-shirt seller continued: “Business is really slow today. Maybe because they’re observing Cheng Beng,” he said, referring to the Chinese occasion in which families visit the graves of their deceased relatives.

Wah, this bloke is a good businessman because he sure knows the likely habits and cultural-religious movements of his customers, in the same as Indian mee rebus, pasembur, roti canai and nasi kandar shops all automatically close shop on Chinese New Year's eves - hmmm, I wonder whether those mamaks blame the orang Tionghua also, wakakaka.