Danger of involving royalty in politics

Extracts from the Star Online: 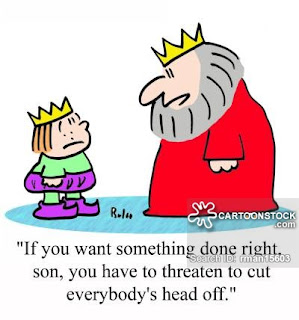 ... Mahathir Mohamad's call for Malaysians to sign the Citizens Declaration in order to urge the royalty to pressure Datuk Seri Najib Tun Razak to step down.

There was no necessity to involve the royalty in forcing the Prime Minister to resign as there are democratic ways of achieving it, said PAS president Datuk Seri Abdul Hadi Awang (pic).

He said there are "others in power" who were better suited to make the decision.

"We don't want to include others who do not need to be included in any kind of change.

"We have political parties and NGOs and others in power and the decision is up to them,"

Though not one to normally agree with Pak Haji, wakakaka, this time I have to say he's absolutely right, for two reasons:

Also see my letter to Malaysiakini titled Hang on a ding-dong minute, my dear Gen Blimp.

If we introduce a stupid precedent where/when royalty can 'pressure' the people's elected representatives into stepping down, then that's the end of the people's democracy.

(2) Really, Mahathir should be the LAST person to talk about appealing to the royals to pressure any politician into stepping down, considering during his time he was the very PM who emasculated the royals. And it has to be said what he did then was correct, probably his one sole act of redemption.

And now he's so desperate he wants us to help him do the exact opposite. And guess for whom?

Doesn't that just make him a double hypocrite, and a very desperate and dangerous one too.

The danger is some may think it's a jolly good idea.