Who is a whistleblower?

The dictionary says a whistleblower is a person who informs on another or makes public disclosure of corruption or wrongdoing. And it's by this meaning that most Malaysians understand the term - more of this in a while. 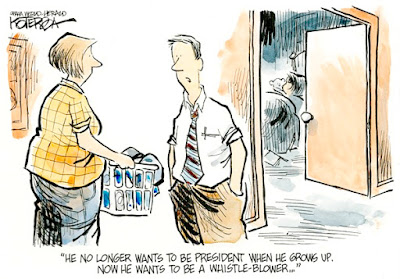 Another word or term for whistleblower could be 'snitch' or 'informer' but these two terms carry slimy sleazy connotations so the famous American civic activist Ralph Nader coined the word 'whistleblower', a term he adopted from the soccer game where the referee blows a whistle on observation of any infringement of the rules. 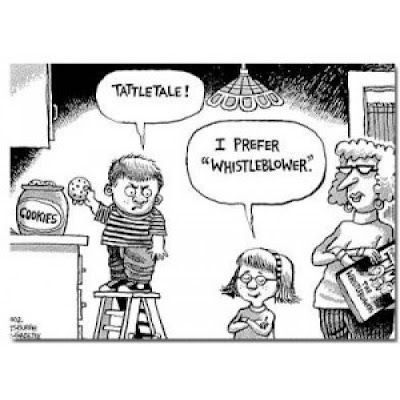 So of late, in the last couple of years or so, we in Malaysia have heard of this term being bandied around freely, flamboyantly but, wakakaka, flimsily just like 'democracy', 'freedom of association' and 'freedom of speech', but with most of its users not knowing what all those four terms really mean.

For example, was Anwar Ibrahim's 916 attempted coup d'etat scheme a true manifestation and example of 'democracy'?

Have Lee Lam Thye, Michelle Yeoh and RPK been allowed their rights to 'freedom of association', something that their abusive detractors themselves cried out for?

As for 'freedom of speech (expression)', it's preferable we don't go there where there have been lamentable violations of this much touted, much abused but alas, least respected 'right' on both sides of the fence, the last being Nathaniel Tan's dirty piece of nasty propaganda shit against Lim Guan Eng - see my letter to Malaysiakini titled Nathaniel Tan’s cherry-picking and missing the elephant in the room - in which he exercised and enjoyed his 'freedom of expression', and granted, I too did so in my rebuttal of his half-truths, hidden truths and 'cherry-picked' truths, wakakaka.

Of course, as in everything, too much rights and very little responsibility would not be good for a nation, community, political party, etc. Too much sugar (sweetness) is bad for us, thus too much freedom (without commensurate social-communal responsibility) is a likewise bad affliction (and habit).

We cannot allow democratic 'freedoms' to launch into their excessiveness when would then invariably promote anarchy and its ensuing chaos.

Hence, one also can't argue on 'freedom of association' to hobnob with a known terrorist like Osama bin Laden or members of the Kiram family, wakakaka.

And one can't use 'freedom of speech' to incite racial violence'.

In a political party, a member can't exploit the concept of 'democracy' to do what he/she likes, like openly defying or opposing a party policy stand, unless of course he/she is prepared to leave or be expelled from or be suspended by one's own party.

Thus there are limits to any excessiveness in exercising one's freedoms and rights, where there must be commensurate responsibility when doing so.

Back to whistleblowing, in Australian legislation pertaining to corporations (as would be applicable to an entity like 1MDB), the definition of a whistleblower goes beyond merely informing on another or making public disclosure of corruption or wrongdoing.

The whistleblower on an institution has to be an insider, that is an officer or staff member of, or in some cases, a contractor involved with the institution on which he/she is whistleblowing.

Secondly, the issue must be one of wrong doing (against the law or an Act) and of corruption.

Thirdly, the whistleblowing must be made in 'good faith' - more of this shortly.

Under such a definition, Major Zaidi in making a police report about the EC's very delible indelible ink was NOT a whistleblower because he was an air force officer but not one in the EC. He was thus an unhappy dissatisfied voter who reported on an allegedly corrupt matter (I use the term 'corrupt' in its widest sense)

By the by, on that ink matter, three air force personnel made police reports but only two were court-martialed. Why?

That's because the two who were court-martialed were those who, on top of making the police reports (their rights as a voter), went beyond that by making press comments (or comments to the press) which was definitely NOT their right as members of the Armed Forces - the 3rd person did not make any comment to the press and was not court-martialed. 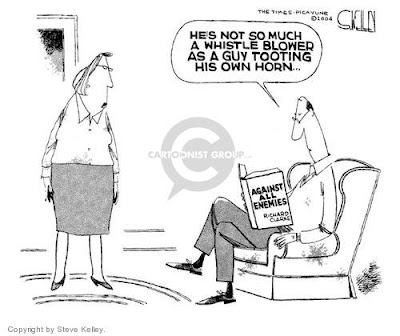 Armed Forces personnel are legally bound to obey certain restrictions as laid down by the law and instructions - these are Malaysian laws provided for under the Malaysian Constitution, not some quirky dictatorial laws laid down by some generals. Also see my letter to Malaysiakini titled Hang on a ding-dong minute, my dear Gen Blimp.

And neither is Rafizi Ramli a whistleblower in exposing this and that, though to be fair to Rafizi, he recognizes this issue when he said, as reported by FMT's Rafizi: I never asked to be protected as a whistleblower:

“But he (Nazri) also needs to recognise that I’m not a whistleblower per se. It’s the people behind me, your faceless citizens and your faceless officers who continue to take risks and provide information that allows people like me to serve the public by speaking out on their behalf.”

But I suspect (not 100% sure) Rafizi might have been incorrect in saying that, for example, in Australia there is a clause in the Whistleblowers Act that allows the whistleblower to go directly to the media because the ASIC (Australian Securities & Investment Commission) Guidance for whistleblowers sets several criteria to ensure they get the necessary protection, relevant extracts as follows:

Note the bold word 'must'.

I suspect this could be because ASIC expects a whistleblower to make an 'insider' report in good faith.

Charging directly to the media would smell badly of bad faith, probably in wanting to score publicity and media points for one's own agenda. Note following criterion. 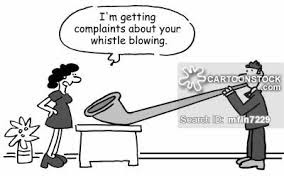 But Rafizi Ramli is NOT a whistleblower just as Major Zaidi never was, but unlike Major Zaidi who was a military officer then bound by military rules, regulations and instructions, Rafizi Ramli is not as he is a politician and can go ahead and make all the press statements but should not expect whistleblowers protection, nor would he be exempt from libellous actions if he recklessly and unjustifiably slanders anyone.

To reiterate, there are limits to any excessiveness in exercising one's freedoms and rights, where there must be commensurate responsibility when doing so.