More than five years ago I posted what I had thought of Minister Nazri Aziz. In that post I wrote (just a small extract): 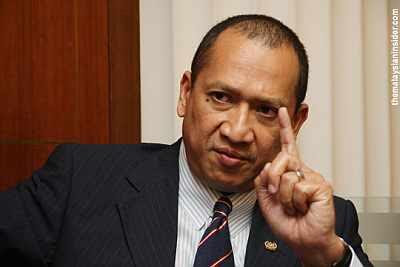 To echo Sakmongkol’s words, Looks like "... Najib needs more people like him [Nazri] in the Cabinet after all. If Najib is wimpish he needs others to provide him with the sinews to his bones."

We may not like Nazri for some of his statements, but I have to salute him for standing up to bigoted demagogues like Jabba the Hutt and Awang Selamat.

If you want to know more about what I had written, please read Nazri Aziz - PM's Chief Head Kicker.

Minister Nazri once again proved my point in the Star Online today (article follows) in which he gave his views on Dr Zakir Naik.

Nazir questioned the need to import a bloke like Zakir when Malaysian Muslims already have their own scholars.

Because Nazir would only say stuff that he believes the PM stood for or has been so told by the PM, I suspect Najib might have the same opinion that Nazri has expressed about Dr Zakir Naik.

But regardless of Najib's opinion, good on you Minister, you're succinctly spot on in your views.


From the Star Online:

PETALING JAYA: Tourism and Culture Minister Datuk Seri Nazri Aziz questioned the need to invite controversial preacher Dr Zakir Naik to give talks noting that Malaysians have their own Islamic scholars to refer to.

Nazri said while those who attended Dr Zakir’s speeches described them as being mild, it should be no surprise that those of other faiths would not feel the same.

He said it was all about perception and this perception was based on what Dr Zakir had done in the past, especially when he had talked about other religions.

"I think if you want to talk about religion, then just talk about your own.

"When making comparisons between religions, you are bound to conclude that your religion is better," Nazri was quoted in an interview with a news portal.

Nazri said Muslims in Malaysia "did not need to be told that they are on the right track" as Malaysians were not new to Islam and had their own Islamic scholars to refer to.

It was not a question of freedom of speech, he said, but of ensuring that Malaysians were not being unnecessarily divided by someone who has no ties to Malaysia.

Nazri said that Dr Zakir would give his speeches and leave the country while Malaysians would be left behind with all the problems that he may have caused.

Dr Zakir created controversy after he was invited to talk at Universiti Teknikal Malaysia in Malacca on the topic of Similarities between Hinduism and Islam.

The police had banned him from the talk but Deputy Prime Minister Datuk Seri Dr Ahmad Zahid Hamidi later allowed Dr Zakir's talk after changes were made to the topic of the talk.