Malaysiakini - 'Focus on ousting Najib, not on his successor' 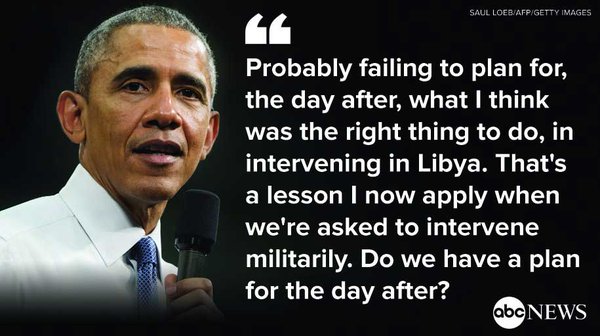 It's more important to is ensure current premier Najib Abdul Razak resigns from his post rather than pondering on his replacement, said PKR information chief Syed Ibrahim Syed Noh.


He explained that Pakatan Harapan’s main agenda is to save the country before it gets ‘destroyed’ under the Najib administration.

“Basically, what’s important now is that we ensure Najib resigns as prime minister. The question of who will be the prime minister after him should not be the main topic of discussion.

There is no bigger bullshit than such an approach, because without an agreed replacement for Najib, the ensuing strife on the 'morning after' will be far worse, far more chaotic, and with far far greater consequences.

This has been exactly what happened in Libya (Obama just confessed/admitted to the US and Anglo-French culpability in lack of planning for the Libyan morning after'), which has been far worse than what happened in the US invasion and occupation of Iraq.

(CNN) President Barack Obama said the worst mistake of his presidency was a lack of planning for the aftermath of the 2011 toppling of Libyan dictator Moammar Gadhafi.

"Probably failing to plan for the day after what I think was the right thing to do in intervening in Libya," he said in a Fox News interview aired Sunday.

This is not the first time in recent weeks he has talked about Libya and the NATO-led intervention which resulted in Gadhafi's death in October of that year, months after NATO first intervened.

Libya today is in a state of anarchy with IS gaining significant footholds in that country.

This is a problem that has plagued the transition from its beginning. Meanwhile, as Kobler warned, ISIS "takes advantage of the political and security vacuum and is expanding to the west, east and to the south. While Libya's financial resources are dwindling, the criminal networks, including human smuggling, are booming."

Malaysia too will be in a state of anarchy when Najib is deposed without an agreed person to swiftly step into his shoes to run the country without any chasmic break in governance.

I dare say IS or/and its local affiliates may ape their Libyan counterparts in exploiting such a chasmic interruption between the deposing of Najib and the agreement to his replacement.

But I'm sure Mahathir already has someone in mind, and which most of us do NOT want as it'll be more of the same 'Mahathirism', wakakaka, but Pakatan as usual is vacillating, procrastinating and playing with their dicks (via their pockets).

Such has been the lamentable hallmark of a leadership-less and mutually avaricious Pakatan (whether Pakatan Rakyat or Pakatan Harapan) because it hasn't ever have the balls to even determine its shadow cabinet. On this it dared/dares not because it fears the coalition will split asunder with avaricious claims and counter claims amongst the so-called partners.

But the component members are merely sweeping unresolved vital matters under the carpet, hoping against impossible hope these matters will magically disappear. But a nasty 'Libya' awaits them, that is, if they ever win the general elections. Their immediate greed has been so great as to override commonsense and their strategic thinking

Any coalition or party in opposition which does not have a shadow cabinet (a proper one, not f**king groups of multiple committees to avoid the real pressing issue) is not worth its salt and does NOT deserve to be an alternative government.

Unless this so-called 'Save Malaysia' coalition nominates an alternative PM, f**k it as it doesn't deserve to be the alternative government. It will only bring upon Malaysia the horrendous drastic situation that Libya currently suffers from.
Posted by KTemoc at 6:12 pm