FMT - 2 ways to reduce cars on roads but which will Penangites prefer?: by Aaron Lim, a FMT reader 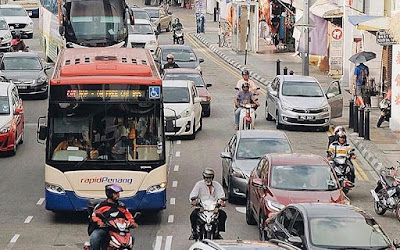 A key discussion in the planning of public mobility is on how to reduce the number of cars on the roads. Generally, there are only two ways to do that.

The first way is through strict enforcement of policies that make private car ownership and usage very burdensome.

For example, the government can impose a high tax to own or use a car, limit the number of cars per household, and reduce road space for car usage by either closing the roads or designate them for public transport vehicles like buses or trams.

This method is very effective in the short run as it can be done within a short period of time, at very low cost.

The social impact, however, is tremendous. Car users are threatened with severe penalties and this causes much inconvenience.

Stubborn motorists will continue to use their cars despite the reduced road space. This will only increase congestion and worsen the driving and commuting experience.

Taking away road space to allow public transport affects the travelling time of drivers. Less obstinate motorists will have no choice but to give up their private cars reluctantly.

This method is easy to be implemented but very draconian in approach. It is therefore only effective in the short run as protests caused by this method are likely to overturn transport policies.

The recent recommendation by the representative of the Institute for Transportation and Development Policy to implement the Bus Rapid Transit (BRT) system in Penang, together with road charges, is very much like this method.

Let's look at some methods which the author Aaron Lim proposed, namely:

Will that be only in Penang or throughout Malaysia? Won't work if only in Penang State as Malaysia is full of 'smart alecs' who will register their cars in Perak, Kedah and Perlis etc, wakakaka.

I believe the Sing government uses this method where in that Island it costs the world to buy a car.

But the Penang State government can impose Penang 'area tolls' (busy spots like Penang CBD etc) for cars carrying less than 3 people in vehicle, where otherwise a toll will be levied - again it's another Sing practice.

(2) limit the number of cars per household

I am not sure how the State government can enforce this policy/rule? Not very practical.

Nor will it be fair as a household may be of various adults with various types of occupations in different locations which require separate work travelling arrangements. Mum may require her own car to send children to school etc.

I recall there was one country in Europe aeons ago, where the road policy for some busy sectors of city or regions was to restrict cars on certain dates/days to ONLY those registered with 'odd' or 'even' (ending) numbers.

Enforcement is VITAL and must be strong, swift and merciless, though special allowances must be instituted for vehicles intending to travel inter-state (wakakaka, BS word of mouth by vehicle-owners is NOT to be accepted).

(3) reduce road space for car usage by either closing the roads or designate them for public transport vehicles like buses or trams.

Watch out for reckless violaters or road-rage drivers.

The second way is to provide a less disruptive public transport service as an alternative to private car usage.

For examples, elevated forms of public transport that do not take up much road space, and with the least disruption, provide an inviting condition for car users to gradually switch to public transport.

Instead of enforcing burdensome policies, this method allows people to slowly cultivate a preference for public transport.

This method, however, requires longer preparation time and higher cost. The Penang Transport Master Plan, with the elevated LRT, is one such example.

Based on the comparison above, which way do you think is more sustainable and suitable to be implemented in Penang?

The other part makes me recall what I read of a Hong Kong expert on its Mass Transit System (MTS) advising us in a recent forum.

Hong Kong has been super successful with the MTS because the people there don't own cars in the numbers that we do, hence their MTS including buses, taxis, etc are invariably successful.

That expert said in Penang and Malaysia there are zillion times more car owners, hence it'll be extremely difficult to persuade or convince people to switch over to public tranportation.

Thus The Penang Transport Master Plan, with the elevated LRT, assuming it's up and running efficiently, makes available only one small part of the solution. Oh BTW, don't forget the bus system like the old Lim Seng Seng, Hin, Yellow and City Council bus systems.

The other is to DISSUADE car owners from using their cars through expensive de-motivators, like Penang gazetting:

(a) Penang 'area tolls' (busy spots like Penang CBD etc) for cars carrying less than 3 people in vehicle, where otherwise a "considerable" toll will be levied,

(b) Perhaps the enforced 'odd' and 'even' numbered system allowed for cars, with very stern enforcement policies. Thrice-offenders will have their cars impounded and confined for at lead a month because fining some rich repeated offenders won't be effective. In earlier days, Hong Kong police had a 'taxi-prison' where repeated taxi offenders had their vehicles "jailed" for a certain period of time, wakakaka.

The solution seems to be:

(a) an alternative but adequate and not-too-expensive system inclduing an effective, comprehensive and affordable bus syetm,

(b) de-motivators to use the car, and

(c) very strong, stern and non-negotiable enforcement (no such thing as 'discounts offered for settling overdue fines', what pathetic enforcement)