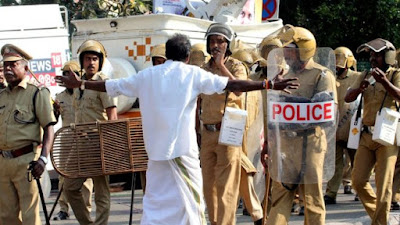 Violent protests have paralysed the southern Indian state of Kerala after two women made history by entering a prominent Hindu temple.

Schools across the state are closed and public transport too has been suspended. One person was killed in clashes on Wednesday.

The Sabarimala temple was historically closed to women of "menstruating age" - defined as between 10 and 50.

The Supreme Court revoked the ban in September, which prompted outrage.

On Wednesday, Bindu Ammini, 40, and Kanaka Durga, 39, entered the shrine around dawn and became the first women to do so.

Thursday saw a second day of protests across the state.

The state government, which supports the Supreme Court ruling, stepped up security and deployed police across the state for protection.

But fearing violence, schools and shops were closed. And buses did not run as protesters blocked highways and other roads.

In total, more than 700 people were arrested on Wednesday and Thursday. Sixty police officers were injured, more than 80 public buses were damaged and at least a dozen police vehicles were attacked.

Yesterday I saw on Australian TV a scene depicting Indian women protesting against male chauvinism on the temple issue, where the sweet ladies lined up for more than 620 km long to show their displeasure.

That's a distance from Alor Setar to Johor Baru, mates.

Looks like it's not only our Pak Hajis in the East Coast who are misogynistic, wakakaka, but our dear mamaks and anehs in Kerala. I wonder ..... ??? ..... wakakaka.

The Kerala state government supports the court verdict and Mr Vijayan has repeatedly said his government will provide the security to enforce it.

But India's ruling Hindu nationalist Bharatiya Janata Party (BJP) has argued that the court ruling is an attack on Hindu values.

The issue has become increasingly contentious in the run-up to India's general election, scheduled for April and May. Critics have accused Prime Minister Narendra Modi of pursuing a religiously divisive agenda to court the BJP's mostly-Hindu support base.

Sounds familiar? It proves that when religion mixes up with politics, some 'naughty' politicians are liable to exploit the religious beliefs of the voters.

BBC also reported on the legend of Lord Ayappa, the principal deity at Sabarimala temple:

Every god in the vast Hindu pantheon has his or her own personality, complete with a unique legend, and Lord Ayappa is no different.

According to the temple's mythology, Lord Ayyappa is an avowed bachelor who has taken an oath of celibacy.

There are several stories about why this is the case.

According to one legend, Ayappa was born out of a union between two male gods which gave him the ability to defeat a she-demon who had been unstoppable until then.

Upon defeating her, it was revealed that she was really a young woman who had been cursed to live the life of a demon. 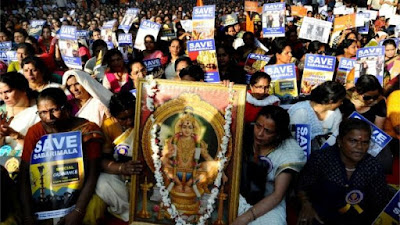 She fell in love with him and asked him to marry her, but he refused, saying he was destined to go into the forest and answer the prayers of his devotees.

She persisted, so he said he would marry her the day new devotees stopped coming to seek his blessings.

The legend says that she waits for him at a second temple, which lies on the way to the main Sabarimala shrine.

Women do not visit either temple - the belief is that to do so would insult both the deity and the sacrifice of the woman who loved him.


Related: Times of India - Kerala on edge as mobs take to streets over women's entry into Sabarimala