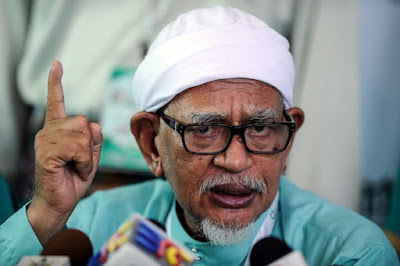 KUALA LUMPUR, Jan 21 — In his harshest condemnation yet of the move to abolish the death penalty, PAS president Datuk Seri Abdul Hadi Awang declared that its supporters lack humanity.

In a lengthy statement today, he said Islam upheld the practice of Qisas (retaliatory) punishment for crimes, including that of murder.

“The priority to preserve human life is a living principle to which even dietary laws are rendered secondary, permitting the consumption of prohibited foods rather than death by starvation,” Hadi said.

He said that according to Islamic teachings, the death penalty meted out to criminals gives life, as it saves the lives of countless others by eliminating said criminals who could have gone on to become a disease upon society.

I consider the above statement by Hadi Awang as nonsense and a deceitful twist of the instructions of Allah swt. But then Hadi Awang has been known to tok-kok.

While the above 2nd last paragraph of his 'extracted' speech, that regarding the permitting [of] consumption of prohibited foods rather than death by starvation is correct Islamic commonsense dictate, Hadi Awang has been very naughty to follow that up by slipping in a following paragraph in which he has the brazen thick-skin to say the death penalty meted out to criminals gives life, as it saves the lives of countless others by eliminating said criminals who could have gone on to become a disease upon society.

That's a BIG FAT LIE as a jailed criminal (eg. murderer, and those who would be convicted with capital punishment under current unamended laws) would be lawfully incarcerated (if necessary) for life, and not necessarily under the touted 30 years imprisonment.

How can then such a criminal jailed for life go on to become a disease upon society?

Hadi Awang himself lacks humanity in insisting on the state executing-murdering a convicted killer who could be confined under humane conditions so as to protect society from such a criminal. 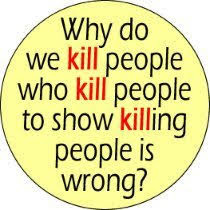 I propose that the jail-term for a convicted killer to range from 20 years to real-life-imprisonment.

For example, a serial killer or a cold blooded murderer should be jailed for life and never to be paroled. OTOH, a person who kills someone in a moment of passion, like retaliating excessively against a robber who has just killed a 'loved one', could merit only a 20-year sentence depending upon the circumstances and mitigating factors.

There should NOT be a 'one size fit all' jail term like 30 years.

But back to my point, namely that it is Hadi Awang himself who lacks humanity to tok-kok and twist religious instructions into a single avenue of 'an eye for an eye', meaning the convicted criminal must be executed (state murder).

Mind you, it's not a monstrous mafulat-ish mentality exclusive to the religious clergy like hadi Awang in wanting to slay back at a criminal a la 'an eye for an eye'. There are all sorts of people who have that mentality, namely, Chinese, Indians, Malays, clergy, laypersons, and even an ex-IGP, etc.

I once had a Chinese FB acquaintance who dismayed, disgusted and sickened me with his very virulent venomous insistence on the death penalty. 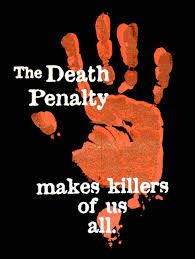 He invited me to view some rightwing YouTube vidoes on serial killers to win over my support for retaining the death penalty. But alas for him, I have read and appreciated numerous neutral-sourced institutionalised criminology articles including statistics which show otherwise, namely, that the death sentence does not affect serious crime rates.

As a Chinese, there is an appropriate Penang Hokkien term to describe his venomous mentality, to wit, 'sim sare moh' (the word 'sare' is pronounced like 'care' but with a typical Penang nasal sound between 's' and 'are', something like 'snare').

The figurative meaning for such a person described means 'he himself is murderous'.

And I wasn't surprised that he turned ugly against me when I did not agree with his poisonous attitude towards executing criminals. 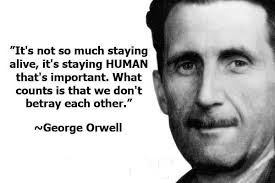 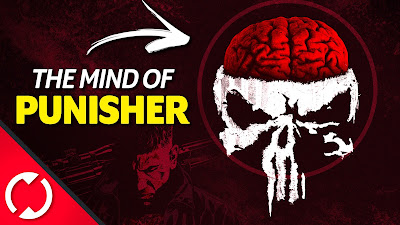 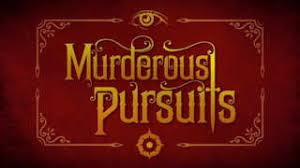