Remember when Dr Mahathir was thumping AAB, PAS was praising the Grand Ole Man sky-high? PAS used to call Dr Mahathir the 'devil' but during his tiff with AAB, he was elevated back to 'heaven' (by PAS 'ticket to heaven'?) as an archangel, and was even hailed as a national hero and probably a national treasure as well. 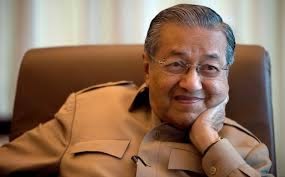 Now that there is talk of the pending meeting between the two UMNO leaders, PAS has changed its mind about Dr Mahathir. PAS VP Husam Musa said:

If I was Pak Lah's advisor, I will tell him not to meet Dr Mahathir.

First of all, Mahathir will dictate to Pak Lah on what to do on several issues like the bridge and the AP (approved permits). In that context, Pak Lah will just listen to him and I think that is not good for Pak Lah. Mahathir will pursue his own agenda.

Wait one! whose side is PAS on now?

Alternatively, both of them can come to terms with one another. They will compromise on certain things but I don’t think that is possible. Mahathir will not stick to his principles and he’s in it for short term gains.

But but but, didn't you PAS people hail Dr Mahathir as a national hero - now you're saying he's a bloke who won't stick to principles?

This talk will benefit Mahathir more than Pak Lah. If the aim of Mahathir is to push Pak Lah down, then he can now dictate issues to Pak Lah, issues (that is) difficult for Pak Lah to answer. If Pak Lah cannot explain (these issues) to the public, it will be more difficult to explain to Mahathir.

Somehow after reading Husam's volte-face vis-a-vis Dr Mahathir, my recent growing respect for PAS has taken a serious tumble. PAS is becoming like Anwar Ibrahim.
Posted by KTemoc at 5:18 pm