Recall my post on Kafir Habir No 2? in which I wrote about the amazing zeal and alacrity with which the most esteemed Malaysian IGP, already renowned for his remarkable vigilance at our borders to prevent an urn of (perhaps radioactive) ashes being sent back to Teluk Intan, has launched an immediate investigation into DAP's Nga Kor Ming and his alleged insult to Muslims. 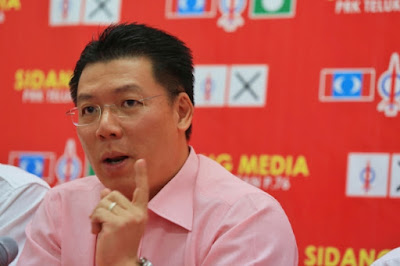 I had then stated (with some minor editing done here to make the paragraphs more easily read but without changing the main points of the contents):

... we can see the clear, very clear difference between the alleged illegal words of a DAP MP (already labelled by the Pahang mufti as a 'kafir harbi') against the sanctioned fatwa (with potential for violence) of a Muslim cleric in Pahang which has not been opposed by both HRH Sultan Pahang (the head of Islamic affairs in Pahang) and YAB the PM of Malaysia.

Ironically, wakakaka, Nga Kor Ming had been one of those DAP pollies who once loved to sprout Quranic verses, of course with the approval of our late Pak Haji Nik Aziz in those now-forgotten halcyon days of pre 2008 to pre-2013 general elections. But now, Nga has been demoted to being just a kafir harbi (I think No 2 to LGE, wakakaka) as per the fatwa of the Pahang mufti.

I have been informed that today the 'geen chua' and 'kim chua' products are so out of date and the producers of paraphernalia for votive offerings have modernized their 'money' products into more recognizable forms resembling modern currency. I guess even Chinese folk religious beliefs has been unable to keep Coreldraw-like applications from intruding into the business of ghostly offerings, given the imaginative entrepreneurial kemampuan of Chinese businessmen, wakakaka.

Anyway, I've to say Nazri has been true to form, in being a reasonable and fair man (that is, only when his PM is not under threat - he is not known as the PM's head-kicker for nothing). Nazri is one of a few UMNO politicians I like, the other being Saifuddin Abdullah who has since gone over to PKR.

In my opinion, Nazri would be the best cabinet minister to head (see, I don't need that overused 'helm' word, wakakaka) the humane and compassionate drive towards abolishing capital punishment, a policy initiation that I feel Nancy Shukri doesn't have the drive nor her personal conviction to handle and to push vigorously for, but which I believe Nazri has. But that's an issue for another day. 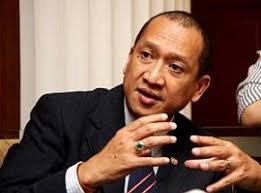 Back to the Hell money for Nga Kor Ming - firstly, he denies posting the alleged insulting words, though of course in Malaysia some politicians are usually deemed 'guilty until proven innocent' while others are never ever guilty, wakakaka; secondly, I believe Nga is a Christian which means he doesn't give two f**ks about the sial-ness (cursed misfortune) of the 'geen chua' when given to a living person.

So UMNO Youth members' attempt to jinx Nga has been wasted. Aiyah, why didn't those idiots consult me? Wakakaka.

Just sliding around to a slightly different but still linked landscape, about Chinese Christians, I read in RPK's blog that my erstwhile sweetheart (cium cium, wakakaka) wrote an interesting article about evangelism in the DAP titled 'What the ‘Take Subang for Jesus’ crowd want next'.

She stated, “Make no mistake. The movers and shakers in DAP are evangelical Christians, and its top leadership comprises evangelistas.”

My response would be 'so what' (to their religious beliefs), but on her unfounded fears of Christians ruling Malaysia, wakakaka what a silly thought dahleeeng, we need to examine the statistics to see how those so-called evangelistas could even rule Malaysia.

But first I have to say what I had often said before, that I very much admire my erstwhile sweetie for her brilliant analyses and use of stats - she could paint a striking and most graphic picture from minute mundane and sometimes bothersome details. Oh, how I love her talent in that.

However in this case of 'What the ‘Take Subang for Jesus’ crowd want next', it seems she has neglected to examine the actual stats on Christians in Malaysia, in particular Christian Chinese Malaysians which who we can safely assume would include those DAP Christian evangelists or as per her description, evangelistas.

So really, using logic and commonsense, and casting aside scaremongering and nonsensical propaganda, what can the minority Christian Chinese (only a mere 2.35% of our nation's population) do to rule the nation where bumiputeras currently constitute 61.8% of Malaysians.

Additionally the bumiputeras hold the reins of the military, police, civil service and various other ministries and government agencies.

Besides, those Christian Chinese have to first get past the majority of the Chinese, 85.5% of whom are Buddhists-Taoists and of course the good-looking 1.6% Chinese atheists, wakakaka. So no worries, we Chinese Buddhists, Taoists and atheists will stop those Chinese Christians from ever ruling Malaysia, wakakaka.

I like you to read my post Tony Pua insensitive to Chinese folk religion which I penned early this year, in which I warned TP and his so-called evangelistas from being disrespectful towards Chinese non-Christian beliefs, as follows:

In one of RPK's posts he predicted that the next general election in 2018 will be pro-Islam versus anti-Islam (meaning DAP and presumably from that, Chinese Christians).

I left a comment saying I didn't agree with that. In my view, in the final analysis, it will inescapably be,  as it has been and yes, will continue to be the war between capitalist-nationalist UMNO and theocratic PAS for the Heartland, more so now that the 3rd Force leader Anwar Ibrahim is out of the political picture. The Malays will have to choose between the two major Malay political parties - and there's no doubt, no denying PAS is a Malay party even with its Islamic claims.

So those 2.35% Chinese Christians won't have a significant role in the political future of Malaysia. Hallelujah!