It’s amazing that this man has come to be respected, admired and adored by many Malaysians of all shades, hue, creed, religious affiliation and background.

Who would have thought an ADUN from the smallest of the winning Pakatan Rakyat coalition in Perak, picked by the Sultan (or his Regent at that time) to be the Perak MB could rise to such prominence in less than a year?

If the royal house of Perak is to be ever thanked at all, thank the Regent for his choice. Fate has a funny way of gifting many Malaysians with the leadership of Nizar Jamaluddin. 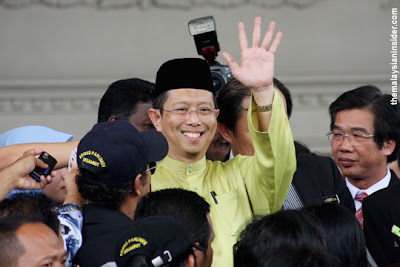 OK, he is not perfect and I bet he would be the first to admit to that, and I know I can easily criticize him for a number of issues, but in general Nizar has shown his mettle, sincerity, fairness, humour, cool, and inner strength, and of course a kind style of leadership.

Pak Haji Hadi Awang should observe and learn how this man has won the hearts of most non-Muslims for his moderate Islamic conduct.

There is an unfortunate, incorrect and defeatist attitude among some Pakatan people, most of all PKR member, that Anwar Ibrahim is indispensable. Gasp, gawd, omigosh, I wonder how this pack of wonders will cope should Anwar accidentally fall under a truck?

No one is ever indispensable nor do we want to see occur in Malaysia the dynastic style of leadership so rife in the Indian sub-continent, where names like Gandhi, Bhutto, Bandaraike and Ziaur more or less guarantee political ascendancy.

While Anwar Ibrahim has been blessed with the gift of a silver tongue and quick wits, I among many others reckon that he lacks the sincerity, selfless dedication and (consistency of) standards to lead or fight for Malaysians.

Thus far, he has been mainly about grandstanding bull and divisive rabble rousing polemics.

He lacks the long term durability and credibility as a good sincere and effective leader, as seen through his own actions and failure to stick to even his own words ... not forgetting his heavy baggage as a former UMNO ketuanan Melayu proponent.

And don't forget he didn't leave UMNO on his accord but was forcefully chucked out screaming and scratching. How could I ever believe in such a person's overnight metamorphosis into a political reformer, and yes, it's more likely I am the Shahanshah of Persia - wakakaka, but on a serious note, I recall his 'Cina, balik Tiongsun' and 'Indian temple bells will stop ringing', etc.

A stark example of his hypocrisy, just immediately after the March 08 general elections and indeed till the recent Perak debacle, has been his shameless boastful espousal of political defectors in his bid to seize federal power, when (until then) his political platform had all along been about political reforms.

In his euphoric arrogance he threw caution and discretion to the wind, doing the exact opposite of his pompous pseudo-pious political preaching.

As reported by Malaysiakini - Karpal to Anwar: Step down as Pakatan head the Lion of Gelugor Karpal lamented "I am somewhat confounded how Anwar could have openly espoused and encouraged crossovers after the people gave a resounding mandate to the Pakatan on March 8 last year."

"In the public interest, and in particular in the interest of the Pakatan, Anwar has a lot to answer for creating the woes of the Pakatan now."

‘Nuff about Anwar, other than to say that as a leader, he is in fact not desirable, not ideal and thus not indispensible.

But realpolitics, particularly in this nation requires not just a Malaysian but a Malay and a Muslim to be its PM.

I propose that we think outside the box, laterally and innovatively.

What about Nizar Jamaluddin?

A PAS candidate adored, admired and respected by many Malaysians.

Nizar as the leader of the Pakatan Rakyat!