I have admired and still do Hannah Yeoh of the DAP. She’s a great representative for the people of Subang Jaya, and I wish her well. 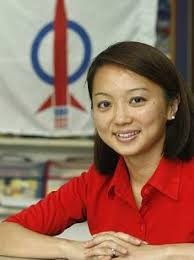 Thus it grieves, in fact distresses me greatly to disagree with her on her views on Anwar Ibrahim’s 916 as measured against the BN’s coup d’état in Perak, which she had posted on her blog, and which saw her article clung on to by the Anwar Ibrahim’s blog like a drowning man would the proverbial straw, and …

… which is now published in Malaysiakini as Pakatan makes no apologies for Sept 16.

Hannah had attempted to dismiss the perceived parallel between Anwar’s 916 braggadocio and the BN’s coup d’état in Perak, and the embarrassing aftermath which saw delirious jeers of padam padan* muka hurled against the Pakatan Rakyat.

* someone who loves me has corrected my poor Bahasa wakakaka

Now what was it that she wrote, which saw Anwar Ibrahim’s webmaster seize on it like a glass of cool water by a man dying of thirst?

… and which undoubtedly would have infuriated Karpal Singh because of the sad spin she attempted to weave in defence of Anwar’s promotion of political defectors (frogs) - an unethical means towards achieving majority rule.

Hannah wrote: “Those who argue that the political crisis in Perak now is a taste of Pakatan Rakyat’s own medicine – a reference to Sept 16 – fail to see the key differences between the two.”

The following 2 points have been why I disagree with Hannah:

(1) Frogs! I am revolted by the very thought of a politician countenancing and tolerating frogs, let alone one bragging about and exulting in gaining the support of political defectors, in his obsession to seize ruling power.

If he has any sense of democratic values, principles and ethics, he should respect the ballot box, the choice and voice of the rakyat!

In this I deplore also what the BN had done in Perak, and regret what HRH had permitted to happen. But no less than these, I have been and still am repulsed by Anwar Ibrahim’s notorious preoccupation since 08 March 2008, that of enticing, encouraging, and egging political defections so they may hand him the key to the PM's office.

I can’t say much about those two Perak PKR defectors as that could have been a consequence of (the lack of) leadership by abysmal example, compounded by their pending corruption changes. I won’t waste a single more word on that revolving door UMNO-PKR-UMNO Nasarudin Hashim.

But I am certainly disgusted with what Hee Yit Foong had done. Though she claimed she had problems with her Perak DAP leadership which had driven her to be a political independent, she failed most abjectly to demonstrate that so-claimed independence and more importantly, she failed to represent the wishes of her constituency.

Instead she showed in no uncertain terms, through press conference and photographs in the immediate aftermath of the coup d’état, that she had already sold her political soul to the BN. In betraying her constituency, she joined the ranks of Jin Bihui (金璧輝) as the most hated female Chinese traitor (in Hee's case, in Malaysia).

What an ignoble finale (for surely 2008 would prove to be her last political election) to her 20 years as a DAP member.

(2) Evidence. It’s all well and good for Hannah to quote to us Anwar’s amazing constitutional procedures but in her one-sided articulation, she failed to explain why AAB had refused to convene an emergency sitting of Parliament or to dissolve Parliament to make way for fresh elections.

Now, why the hell would AAB bother to do that when the BN had won the 2008 general election with (at that time) 140 seats to the Pakatan Rakyat’s 82, a sizeable majority of 58 MPs? Which political leader in a democracy would be so foolish as to do such a crazy thing?

AAB might have been considered by PKR followers as of low intellect but it was obvious he was not that gullible as to take Anwar Ibrahim at his words, which I have alway held to be less than credible. Rather, those people who believe in Anwar's 916 bluff have been light years far more gullible than AAB, the man they had sneered condescendingly upon.

Cutting through the usual smoke and mirrors of Anwar’s bombastic boastful braggadocio, where was the evidence that he had the numbers? Did Mr Man Man Lai present in a press conference the 31 BN MPs who had defected over to his PKR, or take them along to see AAB?

He couldn’t even show or name one, zilch! Can anyone?

All Anwar could offer were pathetic useless excuses.

He had basically hoped for AAB to sign him a political blank cheque. Is this the PKR’s way to parliamentary majority? Through a game of poker bluff?

But regardless of the outcome of his bombastic but bombed 916 attempt, Anwar had openly promoted frogs as a means towards a federal coup d’état, so how could Hannah state 916 was different to the BN’s Perak coup d’état - perhaps save on one point, that Anwar Ibrahim failed miserably while the man he had sneered upon as wishy washy and henpecked, Mr Zigzag, had succeeded.

What Hannah wrote in defence of Anwar Ibrahim’s 916 was probably what had riled Karpal Singh. Karpal is not the spiritual guardian of the DAP for nothing. He has been consistently ethical in his politics, where he has always been against political defections. Such a man is not easily seduced into embracing unethical practice to gain greater political power.

Well, much as I love Hannah as a wonderful DAP representative, she has certainly riled me as well, so let me, someone who voted DAP in the last general election, give Hannah a piece of advice.

Much as the Perak disaster for Pakatan Rakyat had embarrassed the DAP because of its joining someone in wallowing in the froggie cesspool and getting sucked in by its fetid foul and filthy slime, DAP leaders and supporters must take that painful setback on their chin, fight back legally as necessary, but stop making excuses – let it be a lesson learnt, that when DAP joins PKR in vacating the moral high ground, it loses not only its right to criticise but more worrying, its political relevance as a superior political option to the BN.

It’s not worth defending a person like Anwar Ibrahim. Don’t let him drag the Pakatan, particularly the DAP, down to his level.
Posted by KTemoc at 5:48 pm