As I had voiced my fears in UMNO's Nazri supports Elizabeth Wong, PKR's Khalid Ibrahim equivocates I believe that’s about to come to fruition, namely my fears that PKR is gradually disowning Elizabeth Wong (Eli to her mates), who is its ADUN for Bukit Lanjang and an Exco of Selangor State.

I had written what Malaysiakini reported of Khalid Ibrahim’s initial lack of support for Eli):

Selangor Mentri Besar Khalid Ibrahim, asked if Wong would be asked for her resignation, said the state government would look into all aspects of the incident before making a decision on the matter.

“Let the police report go through (it) and then we will have our own discussion on the issue,” said Khalid.

“We are open to all possibilities but given the situation it is best to give the victim the right of hearing and we have to listen to her explanation.”

Man man lai at its most gutless equivocating.
Thus I had feared he was preparing to cast Eli away like a used tissue. Though he subsequently voiced his support for Eli (which he should have in the first place) I wasn’t all that convinced.

Today, alas, I read with greatness sadness Malaysiakini article Nude photos: Wong offers to quit.
Eli had bravely but with tears tendered her resignation as both Exco and ADUN for Bukit Lanjang to the MB. 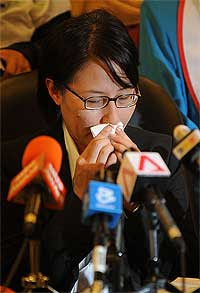 In another accompanying Malaysiakini piece 'I've done nothing wrong' Eli stated her innocence from any immoral or criminal acts but announced: “I have decided to make a stand, in the interest of the party and its struggle for the people.”

I have also received a letter from PKR Sungei Petani, which after lambasting Khir Toyo and Ali Rastam has this to say (extracts):

We, the member of PKR nationwide will always support and stand firm behind you in facing this incident !

Besides, I would like to urge the leaders of PKR especially central leadership to support our YB Elizabeth and persuade her not to quit.

As reported by Merdeka Review, the force of[sic] calling her to quit is actually PKR party leaders after last night's meeting.

As we know this is the conspiracy of BN, it has nothing to do with Eli's moral. Therefore I would call for all PKR party leaders to stand firm behind Elizabeth and support her to continue her responsibility to serve the people !

Dear PKR Leaders, it is time for your to show your support to someone who had sacrificed a lot for the party and the people of Malaysia !

“… the force calling her to quit is actually PKR party leaders after last night's meeting.”

"... and then we will have our own discussion on the issue,” said Khalid"

Why would a person with the inner strength and fighting spirit of Eli who has proclaimed her innocence resign, ... if she was not under pressure from her own PKR people?

(i) She has not committed any crimes,

(iii) Not a Muslim (so khalwat is not an issue),

(v) events photographed were in the privacy of her home,

So why should she resign?

Today Khalid Ibrahim ran, it would seem, to hide behind the yellow sarong as reported by Malaysiakini in MB to seek 'royal guidance' on exco's status.

And a hitherto silent Anwar Ibrahim has finally emerged to comment on the issue, but adopted Khalid Ibrahim’s half-hearted support of Eli – see Malaysiakini Anwar: We'll decide after she returns from leave.

What is there to decide any further when a victim of a sleazy operation, your party member and a most loyal one, needs your immediate support? Her going on leave is a totally separate matter which shouldn't affect your immediate and unequivocal support of Eli Wong - She badly needs that right now - but I guess that's just too much to ask.

Eli was betrayed by someone she trusted who took the photos. But I am more disgusted by those who would betray Eli Wong during her most vulnerable time of need.