Tengku Amalin A’ishah Putri hasn’t yet been conferred her degree, though she has completed a bachelor’s degree in Law at the International Islamic University in May. In June she was immediately appointed as a magistrate in Kelantan. 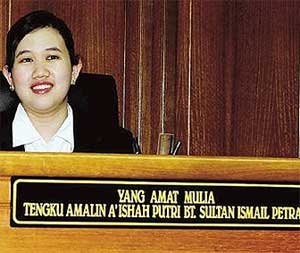 The DAP’s M Kula Segaran (Ipoh Barat) raised the questionable appointment during his debate on the Budget 2007 last week. Kula said that the appointment of such a young lassie contradicted the Chief Justice Ahmad Fairuz Sheikh Abdul Halim’s statement that a magistrate must possess five years' experience before appointment.

Mr Jantan defended the young lassie’s appointment. She is obviously the youngest magistrate in the country.

Nazri spinned in his written reply to Kula: “It is true that it is the judiciary’s aim to place those with experience as a magistrate but this aim cannot be implemented immediately. It has to be implemented in stages.”

“Those without or lacking in experience will be placed in courts which have senior court officers that can assist or guide them (the inexperienced magistrates).”

On the young magistrate not being even conferred the degree, Nazri said she can be placed as magistrates on contract basis if she have fulfilled other criteria stipulated by the judiciary services commission.

I wonder whether the fact that she is Sultan Ismail Petra’s only daughter was one of them.

And to be frank, I am not sure of the maturity level of a 22-year old magistrate, though it most certainly deserves an entry in the Malaysian Book of Records.