The Curse of UMNO's Keris?

Adnan Yaakob, an UMNO supreme council member and also the menteri besar (state premier) of Pahang, asked for the symbol of the keris (Malay dagger) to be removed from the UMNO flag. 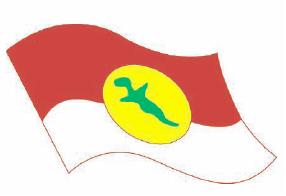 That’s a very startling revelation because the keris is today still identified as a weapon of Malay warrior qualities, frequently seized upon by Malay politicians to grandstand on their ‘preparedness to fight for Malay rights’. Virtually every UMNO Youth leader, including Hishamuddin Tun Hussein, the current UMNO Youth leader, would have drawn the keris at some stage or other during political party gatherings.

However, recently Hishamuddin has attempted to de-ethnic-ise the drawing or waving of the keris. In an earlier posting The Brilliance of Hishamuddin Tun Hussein I mentioned that Hishamuddin managed to get Koh Tsu Koon of the Gerakan Party, and Chief Minister of Penang, to wave a gigantic keris. 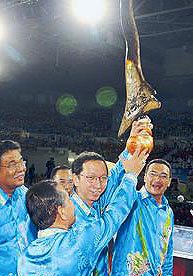 When Koh obliged, as we all know he would, Hishamuddin crowed triumpantly:

“Using the keris as a symbol is not a problem. Even Koh himself used the keris. This is an obselete concept of the younger generation that an object such as the keris would belong to a particular group.”

Now we have another UMNO supreme council member talking about the bad feng shui of the green keris in UMNO’s flag. He said that the keris is a weapon denoting quarrels, and could have been the cause of the numerous quarrels in the party.

At the Sungai Siput Umno division meeting yesterday, he stated: “There were 20 major quarrels in UMNO since its formation 60 years ago. The symbol may signify the party’s struggles but it also means quarrels.”

He reminded us of the acrimonious internal disputes involving the late Tunku Abdul Rahman (with Tun Razak), Tengku Razaleigh Hamzah (with Dr Mahathir), and of course Dr Mahathir (with Ku Li, Anwar and AAB). Maybe we ought to add in Onn Jaafar (with Tunku).

Then there were state leaders such as the late Harun Idris, once touted as a PM, who fell foul of Hussein Onn.

The keris in the UMNO flag is drawn, which, according to belief not just unique to the Malay world, must ‘taste’ blood. Eastern superstition demands that a weapon such as a keris, dagger or sword must never be drawn unless one intends to ‘feed’ it with blood.

The supernatural and dangerous powers of the keris is encapsulated in the Indonesian legend of Ken Arok, and how the master keris smith, Mpu Gandring cursed him for his act of evil.

Ken Arok, the founder of the Rajasa dynasty in the Singhasari Kingdom of East Java, had gone to Mpu Gandring to order a special keris for which he (Arok) had evil and lustful designs. When he saw that the keris was more or less finished but the keris smith still wanted several more months to 'purify' the special weapon from evil influences, Ken Arok killed him with that keris in a fit of angry impatience.

With his dying breath, Mpu Gandring cursed him and foretold how Ken Arok and seven generations of his descendants would be killed by that cursed keris. So indeed the blood flowed throughout the generations, until subsequently someone saw that Mpu Gandring's keris would only continue to perpetrate chaos and death. He threw the keris into the Java Sea. Legend has it that the keris turned into a dragon.

Was Adnan influenced by this Indonesian legend?

Adnan was asked to suggest a symbol to replace the keris. He said: “I suggest a pen or a coin. In UMNO, we need to use a lot of money and there is money politics in UMNO.”