My letter to Malaysiakini has been published yesterday as Putera Umno’s glorification of Mat Rempit ludicrous. Below is full text. 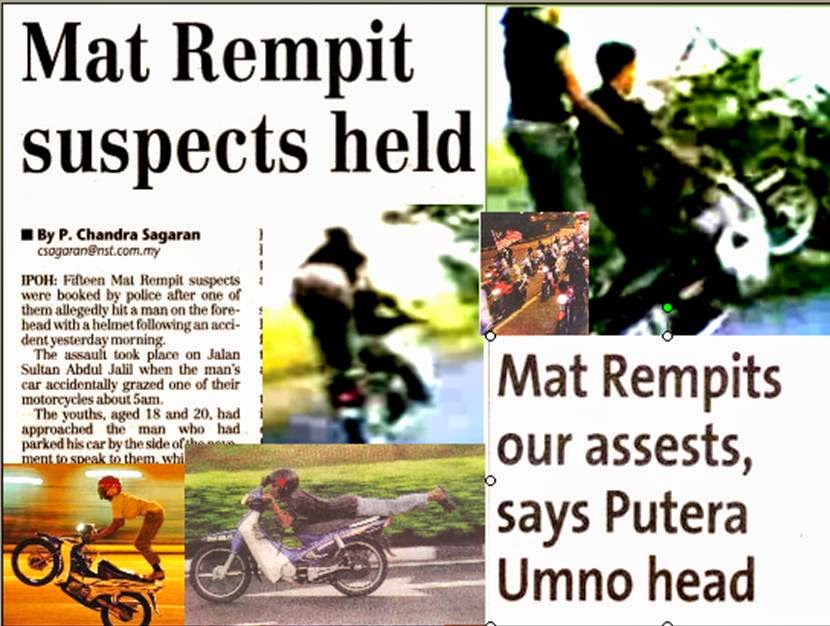 The new inspector-general of police (IGP) has criticised the Mat Rempit (illegal motorcyclists or 'bikkies') as bad for tourism because these bikkies would give tourists the impression that Malaysia is basically a lawless country. The impression would be made much worse when those unlawful motorcyclists are legitimised as Mat Cemerlang, under a ludicrous proposal by Putera Umno.

Most Malaysians have agreed with the IGP and are bemused by Umno's intention to glorify a pack of motorcyclists who have deliberately flouted the laws with their dangerous and reckless driving amidst innocent bystanders. They have collectively been a public nuisance and an endangerment to public safety. 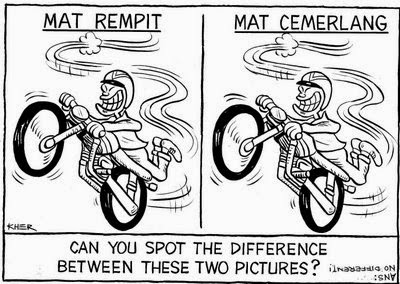 Abdul Azeez Abdul Rahim, the Putera Umno chief, has been defiant in the face of the IGP's condemnation. He insisted that the proposal to confer official recognition to the Mat Rempit as Mat Cemerlang will go ahead.

Last month, Prime Minister Abdullah Ahmad Badawi agreed to the Putera Umno's proposal, and will even officiate at the formal ceremony in November at the Bukit Jalil national stadium when he will then confer those street hooligans with the title of Mat Cemerlang.

How has the PM of a nation allowed himself to be involved in this ridiculous and questionable scheme?

While it seems on the surface that Abdul Azeez Abdul Rahim had been the proposer behind this legitimisation-glorification exercise of bikkies, Abdul Azeez might have inadvertently given the game away as to who was the real brain. Last month, on Aug 26, he said that he and Umno Youth deputy chief Khairy Jamaluddin would 'go down to the ground on their motorcycles to meet the Mat Rempit'.

It seems the PM has indulged his son-in-law again. 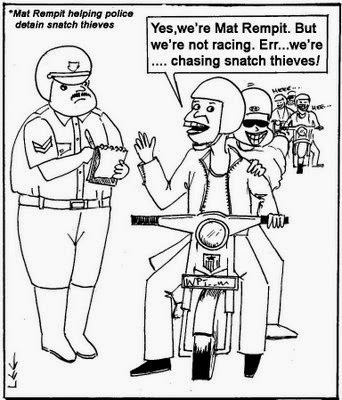 But wait, Abdul Azeez has startling and frightening news for us, beyond the already bizarre recognition by the PM of those bikkies. He said: "The ultimate goal of Putera Umno is to make Mat Rempit the eyes and ears of the police and to report on the activities of rogue Mat Rempit."

For a start, there is no such animal as a rogue Mat Rempit. The label Mat Rempit per se means all of those bikkies are society's rogues. Abdul Azeez has been disingenuous by his attempt to separate chaff from chaff as a public relation spin.

But more sinister than semantics, we see the incipient signs of a private army of bikkies being formed. Putera Umno's intention to associate the Mat Rempit with police activities reinforces the impression. Then, Abdul Azeez confirmed what we fear, that if the group of Mat Rempit are harnessed, they could be an asset to Putera Umno. This is how warlords develop their private militias.

I am frighteningly reminded of Ernst Julius Roehm and his ‘Sturmabteilung’ (storm troopers) or more notoriously known as the Brownshirts - the Nazi Party's political army in its earlier days. The Brownshirts' duties were to protect the party leadership and to attack the opposition. Their strength were drawn from German hoodlums. 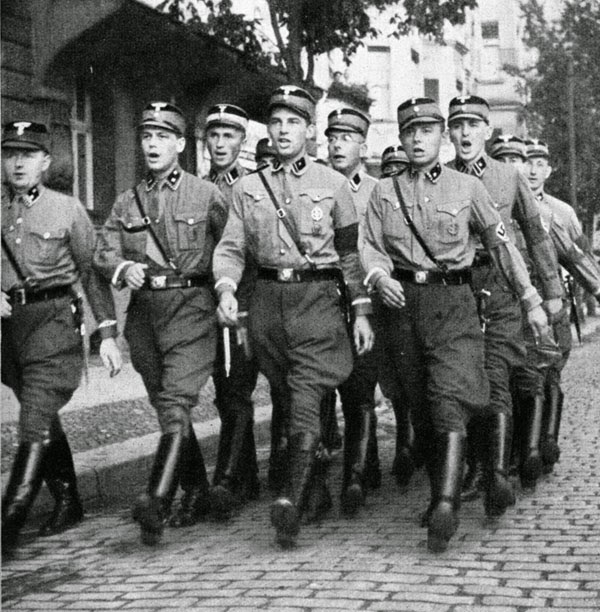 I fear an army of 20,000-strong street scums being legitimised under the sponsorship and patronage of a Malaysian political party. We had already witnessed what harm could be done by political hoodlums in an incident 10 years ago during the Apcet II closed-door conference.

Does the PM know what he has actually agreed to on this sinister Mat Rempit affair? Can he frankly say again that his son-in-law wasn't the one who had talked him into the Mat Cemerlang nonsense?
Posted by KTemoc at 5:32 am