Anousheh Ansari, an Iranian-American telecommunications entrepreneur, paid US$20 million for a 10-day journey.

She has blasted off at 0409 GMT or 12.09 pm Malaysian time in a Russian Soyuz spacecraft, and in doing so set up three space records: first female tourist, first female Muslim, and first Iranian in orbit.

She will return to earth in 10 days with the outgoing US-Russian crew from the ISS. 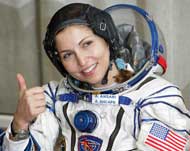 Ansari, who left Iran in 1984 to become a US citizen based in Dallas, Texas, said she wants to be an example to her Iranian compatriots.

She said: "I think my flight has become a sort of ray of hope for young Iranians living in Iran, helping them to look forward to something positive, because everything they've been hearing is all so very depressing and talks of war and talks of bloodshed." 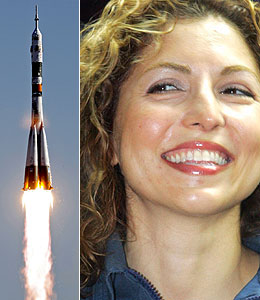 She put on an Iranian flag on her space suit but was told to remove it at the insistence of the Russian and US governments. They also don’t want her to make any political messages during her trip. However, Ansari said she would still pack an Iranian flag for her trip.

Here's a chance for our Boleh-nauts to chat her up when she returns - maybe to ask for tips on how she prays in space.