Israeli war planes fired several missiles at a van it claimed carried Islamist militants. Medics revealed that 11 people were killed, including two children. 42 others were woulded.

The high toll came about when Israeli fighter aircraft fired their missiles in densely populated areas. Their callous disregard for fatal harm to civilians has been an unrepentant show of arrogance despite the outcry over the deaths of seven Palestinians on a Gaza beach on Friday in an apparent Israeli shelling.

Aljazeera's also reported that among the dead, there were three members of al-Quds Brigades, the military wing of Islamic Jihad.

Palestinian witnesses said several missiles were fired at the vehicle. The second missile fired 2 minutes later killed two other people (probably the children). This occurred when a crowd had begun to gather around the scene of the attack. The reporter said an ambulance driver was among the dead.

In the meanwhile, an Israeli internal military inquiry has blamed Hamas for the death of the 7 people (including 3 kids) and 36 others wounded on a Gaza beach last week by Israeli artillery shelling, which I had blogged in Red Sand in the Promised Land.

This accusation of Hamas came after the Israeli military had earlier apologised for its disastrous targeting error. Not good to apologise – American Christian Right supporters, Israel's principal sponsors, may be revolted by killing of children. The Israeli inquiry said Hamas should be blamed for laying mines on the beach.

There you are, you have it with great authority that those Arabs are terrorists, unlike Israelis.

An army spokesman told the press proudly: "We have proceeded with detailed tests to get at the truth and it is clear that the certainty of responsibility by the Israeli army in this tragedy is diminishing more and more and that of the Palestinians increases."

Praise the lord, who is but One! With his blessings, the responsibility by his Chosen People will diminish to zilch, while that for the Palestinians, curse be unto those hewers of wood and drawers of water, will increase a zillion-fold.

But wait, another Israeli newspaper, the leftwing and more fair Haaretz carries a similar report, though it cautioned premature Israeli elation by the white-washing: "The importance of the committee's findings are obviously mitigated by the fact that ultimately, the IDF is being cleared by an IDF investigation."

My underlining & bolding above – isn't it so refreshing, revealing and reassuring to all of us that the Israeli military will, based on the findings of its own internal inquiry, clear its own killers of guilt and place the blame on its foe. C'mon, there’s no doubt Hamas has been guilty all along, as all Arabs ought to bloody automatically be. Anyway, it's meant for American readership, and f**k the rest of the world.

And regarding allegation of Israeli soldiers being wanton killers, please read No Big Deal - Just Untermenschen for an understanding of Israeli justice. 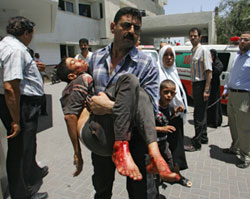 And bet you those two children slaughtered by the air missile strikes were undeclared adults, maybe terrorist midgets with nuclear war headed cruise missiles tucked away in their schoolbags.
Posted by KTemoc at 5:30 am