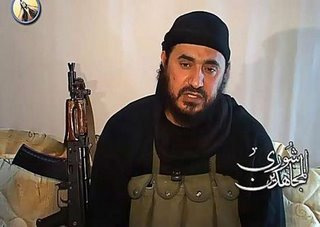 photo from Sydney Morning Herald
Abu Musab al-Zarqawi has been killed in a US air strike. His identity has been confirmed through facial features and fingerprints.

Zarqawi had been the al Qaeda leader in Iraq. His campaigns of killing had indiscriminately killed many innocent Iraqis which led to al Qaeda’s unpopularity in Iraq. Osama bin Laden virtually demoted Zarqawi's status in Iraq in recent times.

There’s great rejoicing in the camps of the Coalition of the Willing, and among Iraqi authorities. But the insurgency activities have been shifting gradually from al Qaeda initiated to the domestic variety where it's now more of a civil war than pure anti-occupiers. But the foreign troops are not completely exempted from attacks.
Posted by KTemoc at 6:19 pm