DAP Lim Kit Siang had challenged Malaysia’s Islamic party PAS to unreservedly commit itself to the establishment of the Independent Police Complaints and Misconduct Commission (IPCMC). As I mentioned in an early posting IGP worried, PM wishy-washy, PAS whoring, PAS has been sneakily coy on the issue of the IPCMC.

What had occurred was when Lim Kit Siang noted PAS’ evasive stand in relation to the IPCMC, he asked PAS pointedly: “Is PAS for or against it?”

“The question is, which opposition would the police throw their votes in support if the IPCMC is set up, if all opposition parties are clear and categorical in their support for the IPCMC?”

“Is this the reason why recently, PAS’ stand on the IPCMC seemed to have become quite wobbly in the hope of benefitting from a police swing against the PM, Barisan Nasional and UMNO over the issue?”

Lim said all opposition parties, PAS in particular, must take a clear and unequivocal stand on the issue and stop the police from becoming a feral force.

As I noted, PAS deputy president Nasharuddin Mat Isa evaded the issue by declining to comment, when as a deputy president of a party that claims to be for justice and godly rule, he could have easily made a firm statement about PAS commitment to the establishment of the IPCMC.

Then PAS secretary-general Kamaruddin Jaffar spoke out in umbrage against Lim’s allusion to PAS prostituting itself in the hope of police support in the next general election.

Lim responded to Kamaruddin outroar: “Frankly speaking, I asked the question because I do not know what is PAS’ stand on the IPCMC. In fact, the party’s deputy president was also unclear as illustrated in the malaysiakini report.”

Lim then referred to the last parliamentary meeting, when PAS MPs had been conspicuously silent and absent in the push for the government to establish the IPCMC.

Maybe they were away discussing the misyar marriage proposal?

Lim continued: “Maybe this is why it’s quite impossible to search the Hakarah and PAS websites and discover any clear and categorical statement by the party leadership supporting the IPCMC although it was the centre of a prolonged national controversy in the past 12 months.”

“PAS should stop flirting with the reactionary police forces ... to gain political mileage at the expense of the prime minister and UMNO, as the IPCMC is a bigger issue than partisan politics or political gain.”

“I was most irritated by the game played by PAS leaders in refusing to express clear and categorical support for the IPCMC.”

As I have often remarked, silence provides an answer too, and PAS' silence or answer regarding the IPCMC is now quite clear. Well, looks like the party which has been claiming God is on their side has not been so godly in its principles. In fact, I did say that PAS is not above prostituting its principles in the hope of electoral gains. And with kaki kang-kang* too! 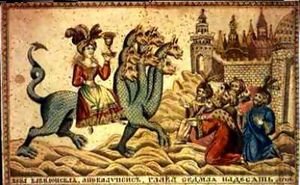 whore of babylon - from Wikipedia

We have known who the Malaysian ‘kings of the earth’ have been and are, and we now know who the whore is. Flirting eh!

And I suppose we the inhabitants of the earth would be made drunk with the anger at the treachery of her fornication.