I want to send this to DPM Najib who had complained that Chinese employers were discriminating against Malay graduates because those Chinese companies' had advertised for applicants with Mandarin language ability.

And apart from being the first Malay student to be honoured in such a manner by the state’s premier Chinese secondary school, he scored 11 1As in the SPM examination last year.

The Sultan of Kedah Sultan Abdul Halim Mu’adzam Shah presented him with the award. Izwan is now taking up an accountancy programme at Kolej Matrikulasi Negri Sembilan. 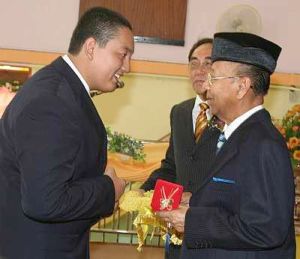 But what annoys me is that this brilliant handsome bloke couldn’t even get a scholarship for his study of accountancy, all because he did not sit for the Basic Economy paper (Kertas Ekonomi Asas).

He said: “I applied for several scholarships but was unsuccessful in all. I did not know the Basic Economy paper is a must for the accountancy scholarship.”

But his parents must have been very proud of his amazing achievement.