I lamented that while an Islamic Arab nation like Qatar can be so open-minded and eclectic in a cultural ceremony for its sporting event, Malaysia had been by comparison so narrow in its Opening Ceremony for the Commonwealth in KL.

I couldn’t help but compare the Doha kaleidoscope of multinational cultures against those of our own first major sporting event.

Then there were the singers at Doha. We saw Hong Kong’s Jacky Cheung, a Canto-pop super rock star being the first to perform with an English song written specifically for the Opening Ceremony.

Many averred that Jacky is probably the most popular and respected Chinese pop singer in the world, winning global awards including Chinese Artiste of the Year in Monte Carlo in 1995 and 1996, and voted one of the world’s Ten Outstanding Young Persons in 1999.

But could a Canto-pop Chinese singer ever appear as a major star in a Malaysian international sporting event? It's demonstrative globalisation.

But without doubt, the most attractive singer has been Lebanese artist Magida El Roumi, who did a duet with world famous Spanish opera singer José Carreras. The exquisite Magida started off in Arabic before José joined her in English, and they soon formed a fantastic duet. I was completely captivated and enthralled by the Lebanese nightingale. 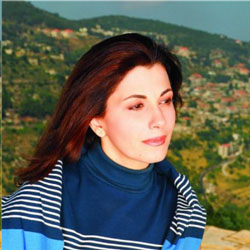 Now get this, Magida and José held hands on stage openly and even cosy up with arms around each other. If that happened in KL, assuming it would even be allowed, one Mufti could well be furiously sending fatwa by SMS.

The lovely Magida El Roumi is Lebanon’s most popular singing export, and also an ambassador for UN’s Food and Agriculture Organisation.

Magida was born in Tyr, South Lebanon. Apparently her grandfather had some business in Palestine (she spent sometime there) and built strong relations and friendships with the locals there. Around six years old, Magida and family moved to Kfarshima, a small town to the south east of Beirut. Kfarshima is known for its religious environment. 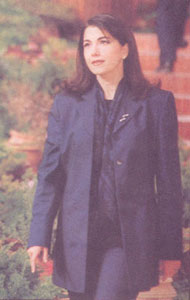 The following is a spill from her fans:

Magida is well known as a devoted believer; she reads the holy books and prays every single day, but most important is that she acts upon her beliefs, and probably that is why she is optimistic and always looking forward to a better future.

Many people have come to identify Magida with 'Sufis'. Magida enjoys reading, and besides the Arabic poetry, she reads a lot of philosophy; that is clearly reflected in the way she comprehends things, deals with others and manages her life.

When you sit and talk with her, you will think that you are in the presence of a lecturer or a philosopher, and in any case, will end up feeling comfortable with yourself, and most important, being more attached to that unique personality of hers.

Yeah, you're telling me. I am already in love with her.

Although a devoted believer, Magida isnt a religious fanatic; she admires all religions and their principles, but most important, she respects the human as an entity of its own and admires freedom regardless of one's own nationality, gender, age or race.

Through ‘Qana’, released in 1996 as a response on the Israeli massacre in South Lebanon, Magida presented a clear Lebanese message to the whole world, a message that was stronger than any other political or diplomatic letter.

Magida affirmed that Lebanon would always be ready to fight for its rights and lands and would never give in and accept any kind of humiliation and disregard. The song was so powerful with meanings that Israeli embassies in some Arab capitals protested against the song and requested the host nation to block it from being broadcast.

Well, we know that in 2006 Israel slaughtered the people of Qana again. I am not Magida El Roumi (no, I am far from being a ‘pretty’ face) but I tried to convey my feelings in a few lines about the massacre of the Children of Qana, which I left at my other blog 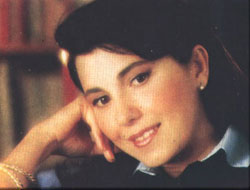 But the point I want to make is that one can be (religiously) pious or (nationally) proud without the need to be narrow or parochial in outlook. The Qatarans and Magida El Roumi have shown us that.
Posted by KTemoc at 4:21 am