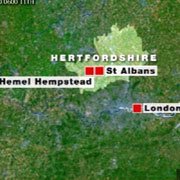 In London’s north, there have been 3 hugh explosions at an oil depot near Hemel Hempstead in Hertfordshire. There have been casualties with many houses damaged. Nearby residents have been evacuated.

The first blast happened at 1403 or 2:03 pm Malaysian time at the Buncefield oil depot, close to the junction 8 of the M1 motorway 10 miles from Luton Airport. The oil depot is a major distribution terminal operated by Total and part-owned by Texaco.

Two further explosions followed around 20 minutes later. The M1 has been closed both ways. The explosions could be heard loudly as far as 30 miles away.
Posted by KTemoc at 4:06 pm