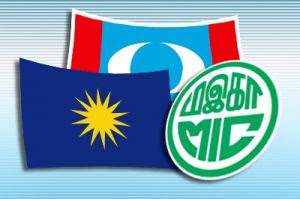 PKR Secretary General Rafizi Ramli says Barisan Nasional component parties such as MCA and Gerakan are more than welcome to join the newly-formed Opposition coalition, Pakatan Harapan if they are willing to conform to their common policy framework.

And why not invite MIC as well? I suspect there could be a sinister reason for this, wakakaka.

I don't believe DAP will be too pleased with MCA or Gerakan in the new coalition. This is the perennial problem with PKR leaders, speaking on behalf of Pakatan as if they are the lord almighty or tuan of PH, like insisting PAS is still a part of Pakatan.

In the first place, why should or would Pakatan bother with MCA or Gerakan when these two BN component parties have been nearly wiped out to the point of extinction. It's plain clear the voters have rejected both kau kau. So why does PKR want them?

The reason and being a conspiracy theorist I believe it to be a sinister one, wakakaka, for PKR still f*ing around with MCA and Gerakan is that PKR could well be aiming to set them, if/when they're within PH, against DAP, in the same divide-&-conquer way as Razak had set the MCA against Dr Lim Chong Eu's once-glorious Gerakan Party (of 1969) from 1972 onwards, and reduced the former once-powerful Gerakan party (and indeed also MCA) to its current useless self.

With MCA and Gerakan in PH, then DAP will be called upon to allocate quite a few of the seats it is currently holding to these two useless parties in 2018, leaving PKR with the party holding the majority of seats among the 'original' Pakatan-ites.

If PKR is so keen on new recruits for PH, why has it rejected PSM? Why has it not invited MIC?