Adenan Satem is changing the game for Sarawak. After decades of rule under Taib Mahmud, it seems like Sarawak has finally got a Chief Minister with the political will and conviction to demand what the state has always deserved but was always denied – the chance to see it achieve its potential. [...]

On September 16, even as KL shook with a flood of red, Najib told attendants at Malaysia Day celebrations in Sabah that the state governments of East Malaysia would soon be given more power to determine priority projects for their states, among other things. This pronouncement was the result of Adenan’s hard work in strengthening the Sarawak Barisan Nasional brand, and Najib knows that it is important that he cultivate Adenan and his policies to keep Sarawak as a BN vote bank.

Change is coming for Sarawak. It is high time that it took its place as one of Malaysia’s premier states, and Adenan is determined to do just that even as the peninsula tears itself to pieces in racial strife. This is what happens when a leader has his heart in the right place, and Sarawak is poised to reap the benefits.

Note the statement in above last para: ... It is high time that it took its place as one of Malaysia’s premier states ...

Indeed, Sarawak as the BIGGEST and RICHEST state in Malaysia should be deserving of the claim, the legend and the salutation of being "one of Malaysia’s premier states" if not THE premier state ...

... how could it assert its entitlement to that title when it could deport a Malaysian citizen from Sarawak, one who happens to be also a Member of the Federal Parliament?

Yesterday TMI reported that Tony Pua was deported from Sarawak after a mere 6 hours in Miri. Pua has been actually on the barred (black) list of Peninsula Malaysians but somehow managed to enter undetected by the immigration computer at Miri airport, though not for long. 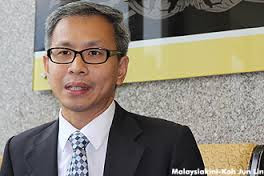 Much as I have been long a supporter of the DAP, I personally do not take kindly to Tony Pua, who might be an ace on analysing economic-financial issues on government spending and calling the relevant ministers to account, ... BUT ...

... who in my opinion is only a young political upstart, a parvenu on the socio-cultural-political sphere, one who hasn't quite acquired the necessary nous so vital in our Malay-dominated society to deal with Malay society, especially with the treacherous PKR, wakakaka.

Yes, Pua for all his technical expertise on financial matters was outfoxed by PKR leaders on both the Kajang Bull and earlier in the exco formation during post-2013 election phase - for more on how he was outplayed by Khalid Ibrahim in the latter, read
Selangor saga shows PKR's ketuanan mentality? and on how he was outplayed by the PKR inner coterie on the art of bullshit satay grilling, read No more 'Bridesmaid Forever' - in the latter I had written:

... PAS has by default of its lonesome self in its hudud path made the PKR option looks as if the latter is the only option for DAP to ally itself with - alas, which has been why PKR gets to not only nominate its candidate for the MB Selangor position but to also sapu most of the exco positions, at the expense of DAP of course, notwithstanding DAP has more ADUNs than PKR in Selangor.

DAP has not been without its own f*up faults. The Selangor branch has been led by an inexperienced and naive Tony Pua who was somehow convinced into playing Chicken Little in the PKR's Kajang Satay shindig but without any benefits for DAP.

Au contraire the DAP was placed in an uncomfy position of being confrontational with HRH - mate, that's not very clever Malaysian politics, unless of course you're Dr Mahathir, wakakaka.

It embarrassed me when Tony Pua asked for a deputy Speaker post for DAP as a quid pro quo for supporting PKR. WTF for, man, because that's akin to wandering into MCA, Gerakan and MIC territory of picking up f* meaningless crumbs!

I was damn glad, nay, grateful that Azmin Ali spurned his Oliver Twist-like request, though I am still attempting to soothe away my pro-DAP shame.

But nonetheless, notwithstanding his lack of nous in a mainly Malay political world, Pua is a Malaysian citizen let alone his position as an elected Member of the federal Parliament.

What Sarawak has done by deporting him is to show gross disrespect to Parliament and indeed to the Federation of Malaysia.

While Sarawak has autonomy on immigration matters, it should not have abused that autonomous powers to deport a Malaysian Member of Parliament, showing gross disrespect to federal parliament and the Federation, especially not after half a century of being part of Malaysia.

Thus I have to ask: Is Sarawak really ready to assume its claim as "one of Malaysia’s premier states" when it behaves like a pathetic paranoid provincial state?

Part of the reasons why both Sarawak and Sabah have been neglected in their development is not so much the economic-financial marginalization of them (while there can be no denying that sadly there's that), but their own rejection of inflow from the private sectors of the Peninsula including and especially from the small business sectors and individuals.

Let me provide a very small example of such a happening as narrated by one of my uncles. Perhaps it might not have been the best example of what I want to demonstrate but nonetheless it shows that changes and development can be exponentially quite rapid when there is no unnecessary restriction of economic activities.

Prior to April 1984 the island of Labuan could be said to be a backwater town, at least socially and culturally, and apart from business associated with the oil and gas industry and supporting the various armed forces (navy, air force and army) detachments there, even financially and economically.

Then thanks to an (alleged unilateral) decision by then-CM Harris Salleh, wakakaka, it became a federal territory (FT) in April 1984.

Following its status as a FT and minus Sabah's autonomous immigration control, there was uninhibited influx of small business migrants from the West. With that, the once-quiet (almost dead) town swiftly shrugged off its decades of social-cultural stagnation to become quite a bustling busy hot spot, complete at the sharp end with even (wakakaka) Penang char koay teow*, roti canai and all sorts of hawker food from the west. Even the locals were quite taken by the then-new gastronomical delights. T'was one of the benefits, albeit a very small one, of allowing West Malaysians to conduct business there.

* actually there were West Malaysian hawker food prior to April 1984 BUT only in Membedai, in the air force base, all run by the RMAF people & families who were mostly West Malaysians, thus of West Malaysian origin. There was none in Victoria town operated by locals

I urge Sabahans and Sarawakians to cease their own imposed isolation from their fellow-citizens from the West and allow free flow of these people to their lovely states in exactly the same way as we in the West have allow Sarawakians and Sabahans to come to the Peninsula to work, settle down and even marry our good looking sweeties, because a favourable consequence of such free flowing movements will automatically and inevitably carry with them economic and business opportunities, investments, new ideas and choices, and developments.


The totally unnecessary deportation of Tony Pua sadly reflects the sad mental provincialism of Sarawak and its adverse consequence.

Provincialism like the (originally noble-intended but now) much-abused NEP and other discriminatory programs only favours the interests of the few but not the rakyat.