Yesterday I posted Chinese puzzle in Petaling Street which discussed the very unusual utterance by the Chinese Ambassador on a particularly sensitive issue regarding Petaling Street.

His remarks could be seen as interfering in the internal affairs of Malaysia, and I haven't been surprised that Wisma Putra has summoned him for an explanation.

Being a conspiracy theorist (wakakaka) I did of course suggest that his unusual-for-a-diplomat statement in Petaling Street might have been a bisa-diatur arrangement between Beijing and Putrajaya (for unknown reasons) and the summoning by our Foreign Office is all a sandiwara.

The Chinese ambassador's visit to Petaling Street was an act of goodwill and the envoy has no intention of interfering in Malaysia's domestic affairs, said the China embassy, following Wisma Putra's intention to call up the envoy for an explanation tomorrow.

..... the embassy said ambassador Dr Huang Huikang's visit on Friday was in conjunction with the Mid-Autumn festival which was being celebrated today, and he gave out mooncakes to the traders and visitors of the tourist and shopping hotspot popularly known as Chinatown.

The embassy said he also made similar visits during major festivities in Malaysia, including Chinese New Year, Hari Raya and Deepavali.


In Malaysia and Singapore only, the Mid Autumn Festival has also been celebrated as a Lantern Festival, maybe because we don't have autumns wakakaka. As a wee lil' kid I quite enjoyed carrying a lantern in the shape of a carp (goldfish) and sometimes a bunny (animal associated with Moon Goddess) around my kampung. However in China, its lantern festival is on a different date, one that's on our Chap Goh Meh. 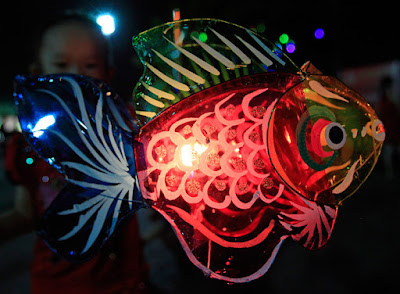 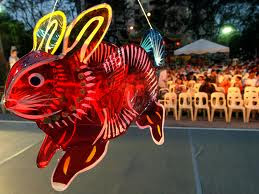 Now, if kaytee wants to stir sh*t regarding the Chinese Ambassador's visit to Petaling Street where he presented mooncakes to the local traders, I could point out the ominous and indeed very seditious implications of a Chinese official giving mooncakes to local Chinese, wakakaka.

Hmmm, I wonder whether a modern Chinese like His Excellency, born and brought up in atheistic communist China, is even aware of the history and significance of mooncakes, wakakaka