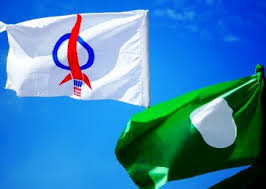 PAS today said that it had reached a consensus with PKR that the two parties along with DAP and Parti Amanah Negara (Amanah) would work together as part of an opposition bloc.

Is PKR authorised to speak on behalf of DAP? Or is it as usual exercising its belief again as Tai-Koe (Abang) and could say anything it likes about DAP without consulting its (supposed) ally?

I remember reading just a couple of days ago that Lim Guan Eng mentioned rather emphatically DAP won't work together with PAS ..... unless PKR has successfully persuaded it to kiss and make up with the Islamic party.