PKR said today that it is of the opinion that PAS should be in the new opposition coalition.

Azmin had previously stated that his party wanted to continue cooperating with PAS in the new opposition coalition and it seems that the party is standing firmly on the matter.

The Bukit Antarabangsa assemblyperson was asked on Penang Chief Minister Lim Guan Eng statement that it was untenable for PAS to be in the new coalition as its president, Abdul Hadi Awang, had announced that PAS would field candidates in all DAP-dominant seats.

Azmin, however, believes that this was merely Lim's personal view on the matter.

"What I have stated previously was not my stand but PKR's. It's not my personal stand or Wan Azizah's."

"We have discussed it thoroughly and have included the view of PKR de facto leader Anwar Ibrahim. Anwar stated that PKR should always be inclusive," he said.

So ... PKR should always be inclusive, and presumably that inclusiveness extends to also UMNO? Wakakaka.

It seems in the assessment of Azmin, Lim Guan Eng is just Lim Guan Eng, thus who the f* does Lim think who he is, to say that it was untenable for PAS to be in the new coalition.

Well Azmin, Lim Guan Eng is ONLY the DAP's secretary-general, so f* you!

But wait, I apologize to Azmin, wakakaka - obviously Azmin had meant that someone else in DAP could have a different opinion to Guan Eng. Yes, that must be it for Azmin to have said "That is his view and it is up to the DAP", separating Guan Eng from the DAP!

And I suspect that Azmin might have meant Lim Kit Siang could and probably would have a different view to Guan Eng. Of late, Lim Senior has been very "accommodating", wakakaka. Afterall, if Lim Senior could find it possible to work with Mahathir and even to support the MACC, what's working with PAS?

Read on, this is really cute or bizarre, wakakaka!

According to the Malay Mail Online, Lim Senior has proposed Nazir Razak, who is currently the CIMB Group chairman, be appointed an honorary Ombudsman to keep Cabinet ministers in line and stop them from saying “stupid things”. 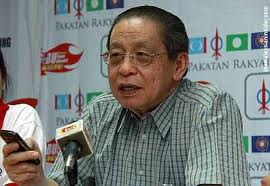 Lim Senior (note I distinguish between Guan Eng and his headless chook of a dad for the latter's senseless clucking) reckons Nazir Razak "would be the perfect candidate for the job, since the latter warned the so-called “power people” two weeks ago against inane remarks amid the continuing decline of the ringgit."

Then, may I presume also that Nazir Razak once appointed an honorary ombudsman, will be able to keep Lim Senior in line and stop him, from saying "stupid things"?

Stupid things like an honorary Ombudsman to keep Cabinet ministers in line and stop them from saying “stupid things”. Oh Uncle Lim, where do you come from?

Stupid things like not knowing what an ombudsman can and cannot do?

In brief, an ombudsman for a specific area of public interests (eg. banking, defence, electricity, police, etc) receives and hears complaints by members of the public against the department of his/her assigned jurisdiction, is empowered to call witnesses to provide information, even under oath if necessary, and/or to provide required documents in the course of investigating the public complaints, but does NOT hear arguments (like a judge) during his/her investigation into a complaint, makes his/her recommendation on findings of defective administration but which is NOT a legal instruction or compulsion.

Only if the ombudsman finds his/her recommendation to remedy a found defective administration has not been implemented to his/her satisfaction, would the ombudsman make a full report to (federal or state) parliament.

Lim Senior (not Junior, wakakaka) wants his honorary ombudsman to be able to summon miscreants (namely, those saying stupid things) so as to publicly lecture them for their stupid utterances or acts which undermine Malaysia’s national image. In this, he asked us to imagine ministers like Zahid, Abdul Rahman Dahlan, Madzir, Ismail Sabri, Salleh Said Keruak, Azalina and Shabery Cheek getting a public tongue-lashing from Nazir.

Surely that will be a ludicrous world-first, hitherto a BN-UMNO monopoly wakakaka, and I have to admit I didn't expect Lim Senior of the DAP to be the one to come up with such a bizarre idea of a 'Chinese school headmaster' type of ombudsman, one who can give a tongue-lashing to ministers and 'power people' for saying stupid things.

But then OTOH, given Lim Senior's remarkable behaviour lately, yes, it's not so unexpected afterall. In fact I would deem his bizarre proposal and weird understanding of an ombudsman as "undermining Malaysia's national image" so he should be the first to receive the tongue-lashing, wakakaka.

Slightly 3 years ago, I mentioned, nay, criticized RPK for getting carried away too much with his proposal for instituting an ombudsman (or committee of ombudsmen) for the 5 States then under the DAP-PKR-PAS governments. I commented he took my breath away with what I saw as his over-the-top proposal.

RPK had then proposed: “The Ombudsman must be above the Chief Minister and Menteri Besar."

"It must have the power and authority to summon even the highest man in the state to come before the committee for questioning on anything at all that may be perceived as wrongdoing, transgressions, deviations, etc."

"And the Ombudsman must have the power and authority to recommend the removal of any public servant or politician who may have committed a breach of discipline, even if he is the Chief Minister/Menteri Besar.”

I mentioned that those proposals were going too far, by putting an unelected person above the elected representatives of the people!

It would not have been unlike the government of Iran, where the unelected clerical Supreme Leader and the Assembly of Elders in Iran ride shotgun over the elected President and the Majles (Parliament).

The reality and fact is an ombudsman is no more than an independent individual of some standing in the nation or state, say, a retired judge, retired senior civil servant or retired leading academician or someone of the public status and integrity of Ambiga Sreenevasan (though not Maria Chin Abdullah wakakaka), and probably the most sterling example of all, a genuine Malaysian and a Towering one as well, but alas too late for us today, the late Ms Lim Phaik Gan (more popularly known as P.G. Lim) ...

... but on Lim Senior's recommended person, namely, Nazir Razak, I wonder whether he can be considered as an 'independent' vis-a-vis his regard for his politician brother? I asked Lim Senior the same of Mahathir in my post Is 'conflict of interest' alien to Lim Kit Siang? when he wanted Mahathir to head a RCI to probe into 1MDB financial status.

The ombudsman is usually appointed by the government or by parliament to represent the public interests. He or she does this by investigating and addressing complaints reported by individual citizens, ...

... meaning he doesn't and can't just haul people up for tongue lashing, as Lim Senior has proposed, whenever he thinks or assesses they have made stupid statements, wakakaka, but a school headmaster may if those 'stupid people' are his students, wakakaka again.

I had then written: The ombudsman is more interested in mitigating administrative injustice and correcting a system rather than taking punitive actions. An ombudsman does not have executive powers to sack or dismiss anyone ...

... or for that matter, tongue-lashes, wakakaka, any ministers or people in power who say 'stupid things', though I suppose we can make an exception if one of those 'stupid people' is an opposition leader who has been the one proposing a tongue-lashing version of ombudsman wakakaka again.

I continued: But in a democracy it would be the foolish government or private corporation which ignores his/her recommendations, which usually would be, as I mentioned, to right any administrative wrongs for the just benefits of the individual or the general public.

I ended up by stating: I certainly welcome the introduction of ombudsmen into our political and financial systems, and public and even private institutions (especially for Police and banking matters).

But let’s not overcook the new meal by making him/her into a pseudo-Ayatollah with supra powers over the people's democratically elected representatives.

I had then teased RPK by saying I would like to keep my ombudsman-steak medium rare please! Wakakaka. And wonderfully or civilly, RPK and I are still mateys despite my disagreeing with his 'ombudsmen' then.

So what's the difference between RPK's ombudsman and Lim Kit Siang's version?

RPK had wanted to give his ombudsman more power than would be appropriate (for an unelected person), in order to curb wrongdoings, transgressions, deviations [corruption] and ill discipline. The aim was noble but the empowering of the ombudsman would have militated against the concept of democracy, where an appointed and more importantly, unelected person could overrule or dictate to elected representatives.

Lim Kit Siang wants his ombudsman to scold ministers and 'power people' for making stupid statements. I'm not sure what Lim KS wants or hopes to achieve, but scolding ministers is actually the role of the voters.

You decide who had made the far superior proposal?

An ombudsman trivia before I come back to our remarkable Lim Senior – while the term 'ombudsman' meaning ‘representative’ stems from Sweden, it seems prototypes of ombudsmen flourished in China during, strangely, the draconian Qin Dynasty (221 BCE). Maybe then those ombudsmen were of the tongue-lashing as well as whip-lashing type, wakakaka.

OK, now this is for Lim Junior, that's right Guan Eng and not daddy Kit Siang, and also DAP Perak's Nga Kor Ming, both of whom have great interests in Islamic history, wakakaka, that it was actually Umar ibn al-Khattāb, the second Muslim Caliph (634-644) and his concept of the Islamic Qadi al-Qadat, which influenced the Swedish King, Charles XII.

Poor Charles was in self-exile in Turkey when he learnt of the Islamic ombudsman concept. When he returned home in 1713, he created the Office of Supreme Ombudsman, which became the model for the world.

I hope our Lim Senior, that is Uncle Ah Kit, should think of early retirement, because nowadays I find it more and more difficult to bring myself a DAP supporter to say when in times of distress, "In the name of our Father, the Son and the Holy Ghost", as I have lost faith in the Father ..... unless he now gives Azmin Ali a tongue lashing for being grossly disrespectful to Guan Eng the sec-gen of the DAP.

Amen and wakakaka.
Posted by KTemoc at 3:04 pm