Five days ago in a previous post "Chastise with the valour of my tongue ..." I pondered whether we Malaysians could be politically affected by a weird sickness, perhaps stemming from a combination of the unearthing of unknown mind-affecting viruses during the 2004 tsunami and an unhealthy diet of, among other things, kangkong, rancid satay, baked coconut puffs and bah kut teh, wakakaka. 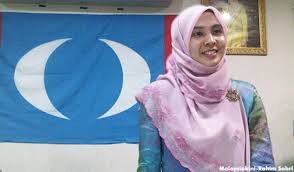 I was attempting to trace the cause of the strange political malady which saw many of our leaders 'in bed' or attempting to jump into bed with their erstwhile invincible foes, blokes like Lim KS and Mahathir, and Mahathir seemingly supporting a protest rally, Bersih, so on so forth.

I could have even started that previous post with a startling scary statement like "Strange things are happening in Malaysia".

But I didn't. Instead I talked about Anwar Ibrahim's insistence that PAS continues to be in Pakatan, the new one, despite the Islamic Party having gone separate ways with its new and current foe, DAP, and vice versa.

We know the real reason is that PKR fears meeting both PAS and UMNO in a 3-cornered fight in Malay-majority constituencies, thus Anwar and indeed Azmin have both insisted and persisted on declaring PAS as a continuing Pakatan coalition member.

[Of course by now we know Pak Haji Hadi Awang saw through PKR's clumsy chowkana chumminess and has virtually told them off, describing it as only wanting to win elections but not about promoting Islam  see Malaysiakini's Hadi: PAS will not join new opposition pact]

DAP of course has also insisted and persisted on the contrary, but from Azmin's statements, it would appear that PKR values partnership with PAS more because he (as mentioned) fears PAS contesting against PKR in GE-14 and the new state elections in Selangor and somehow believes easily-fooled DAP won't as the socialist-democratic party can be manmanlai kowtim-ed.

Mind, Azmin might not be wrong there if left to the headless chook or the screaming one, wakakaka, though Ramkarpal Singh has now thrown a damper on his belief by drawing a line in the sand, urging PKR to make up its mind whether it wants PAS or DAP to be its partner in the new coalition?

Then, aiyoyo, came along sweetie Nurul Izzah, thus indicating to me that it's not just Lim KS who has been afflicted by combination of the unearthing of unknown mind-affecting viruses during the 2004 tsunami and an unhealthy diet of, among other things, kangkong, rancid satay, baked coconut puffs and ..... (the last item not applicable to Nurul), wakakaka.

I'm leaving Mahathir out from being affected by the weird malady, because I know that, notwithstanding his 'guest appearances' in Bersih 4.0, those theatrics of his were not about the objectives of Bersih (admittedly today somewhat of a deviant nature from its principal objective of campaigning for a clean, free and just elections) but more to depose PM Najib Razak for his OWN agenda.

Sweetie Nurul tried her best to justify PKR's insistence on PAS being in Pakatan 2.0, perhaps more of a plaintive cry to DAP to 'understand' her party's stand, stating (via TMI) PKR accepts PAS because of reform agenda.

And what were those reforms she saw in PAS' political agenda?

TMI reported: Party vice-president Nurul Izzah Anwar said there was a need to have a more inclusive outlook when it comes to fighting against Barisan Nasional and Umno.

She said that such has always been the party's stance and it was never about party president Datuk Seri Wan Azizah Wan Ismail or deputy president Mohamed Azmin Ali's personal positions on the issue.

She added that the agenda of reform also covers the possibility of working with former prime minister Tun Dr Mahathir Mohamad, with the aim to press Prime Minister Datuk Seri Najib Razak to step down.

"If we were to take into consideration personal anger and bitterness, certainly it's going to be difficult to manage the different challenges because at the end of the day, for me, it is important to exercise the maximum degree of inclusiveness so long as everyone is committed to the agenda of reform.

"We also have to think about the need to unite any force, including Tun Dr Mahathir Mohamad who came to Bersih 4 rally twice."

Let me summarize for you her claims of PAS' reform agenda:


The first three dot-points have been about embracing both PAS and Mahathir, based on their reform agenda (presumably Mahathir also has one since he attended Bersih 4.0).

The 4th dot-point is the aim, namely, to depose Najib.

The last (5th) dot-point is an appeal to DAP to kiss and make up with PAS.

It's clear Nurul has her dad's genes because she claimed PAS has a reform agenda but didn't tell us what that agenda is. Does she expect us to just believe her? This is pure grade 101% manmanlai. Nor has she informed us what's Mahathir's reform agenda?

If the common objective is to depose Najib, just say so instead of bullshitting about PAS' non-existent reform agenda.

But then, on second thoughts, perhaps I shouldn't be too harsh on her for using that word 'reform', as we know PKR has been brandishing that word for the last 15 years without meaning it.

Indeed, how could PKR claim to be a reformist party when it promoted seizing federal power through (alleged financially-induced) defections of MPs in its infamous deformasi 916?

Indeed again, how could PKR claim to be a reformist party when it promoted its intra-party's struggle for control of state power through an unnecessary by-election at great cost and inconvenience to the public (apart from betraying Kajang-ites) in its infamous lie about the Kajang Manoeuvre?

Indeed yes indeed, how could PKR claim to be a reformist party when twice its party elections had been so 'entertaining' (wakakaka) that even the EC was said to envy some of the 'innovations' reported (wakakaka again)?

My dear Nurul, before you can claim that PAS has a reform agenda but without telling us what that would be, please reform you own deformasi party, and please lah, no more of your dad's type of manmanlai.

And some in PKR dare to preposterously title her as Putera Reformasi (what a wakakaka) and to promote her as a substitute for Anwar Ibrahim as Pakatan PM-designate! What a bloody joke!