For grubby politics, not for justice 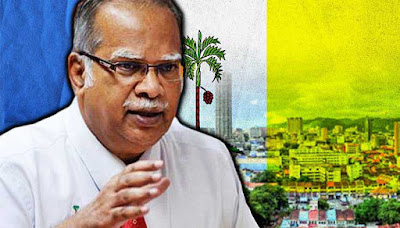 He said Penang, Selangor and Kelantan that are governed by the federal Opposition parties have little faith in "merely signing the empty pledge".

"Penang in particular has no faith in the MACC given the fact that agency has done little to address the menace of corruption," he said in a statement issued today in response to MACC chief commissioner Datuk Dzulkifli Ahmad who has criticised the state's reluctance in signing the pledge.

Ramasamy also questioned why the MACC was overly concerned with states that have not signed the pledge, saying it should instead be convincing these states that it can act against those involved in corruption without fear or favour.

"But unfortunately, the MACC is not free from political interference and it will continue to be so for a long time to come. Given this, why should Penang or Selangor or Kelantan take the Corruption-Free Pledge seriously?" he asked.

He told Dzulkifli that the signing of the Corruption-Free Pledge is not as important as fighting corruption and abuse of power in the country.

Dr Ramasamy has been absolutely right to distrust MACC which has been talking cock only.

But how does Dr Ramasamy explain that just 2 mere years ago, in 2015, Lim Kit Siang gave his full-hearted support to the MACC?

In a completely unexpected turn of events, DAP leader Lim Kit Siang shook hands with a top Malaysian Anti-Corruption Commission (MACC) official today to show the opposition’s solidarity with the beleaguered anti-graft agency that is under investigation over its probe on 1Malaysia Development Berhad, a far cry from the days when the DAP used to slam the MACC over the death of political aide Teoh Beng Hock.

Indeed, much to the shame of ethics, principles and morality, Lim Kit Siang has treacherously supported the MACC just a bloody mere year after he accused that organization of Teoh Beng Hock's mysteriously death or, as DAP supporters suspect, murder.

Even former MCA president Ong Tee Keat, who left/resigned from MCA since 02 January 2017, saw fit to write in a letter to Malaysiakini (extracts):

The loss of life, especially while in the custody of government enforcement officials, is always a serious matter of public concern.

There cannot be no answers for this particular case.

It's simply not acceptable that one can die in the MACC's custody without knowing what had happened.

Teoh voluntarily stepped into the Selangor Malaysian Anti-Corruption Commission (MACC)'s office to give a statement as a witness. He failed to come out alive, while under MACC's custody.


But Lim Kit Siang, senior DAP leader of the same party as the late Teoh Beng Hock, could bring himself to support the MACC.

What a terrifying immoral volte-face!

What faithless abandonment of justice for Teoh Beng Hock!

Basically there is nothing immoral, shameful or disgusting Lim Kit Siang is not prepared to do today just to feed his personal political obsession, which I personally suspect is to see himself in government at least for a term before he retires.

It is his sad sinister Swansong of a sellout.

Our family has always supported the DAP since its inception in 1965. I will say we still do though we have given up on Lim Kit Siang who we believe is a pitiful but painful blight on the party.

But while Dr Ramasamy has been right on the DAP refusing to sign the MACC Corruption-Free Pledge, he must now explain or elicit an explanation from turncoat Lim Kit Siang for his support of the MACC, an organization he Lim Kit Siang himself vowed that DAP and Pakatan Rakyat would continue to highlight the injustice of Teoh Beng Hock’s unresolved murder.

kaytee note: above is correct usage of term 'turncoat', to wit, being a 'turncoat' to Teoh Beng Hock's memory and his family.

Lim Kit Siang might have treacherously abandoned the cause to seek justice for Teoh Beng Hock, but we many DAP supporters haven't: 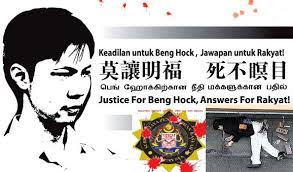 Alas, someone in the DAP might have forgotten
The evil that was perpetuated on a young man
By a Nazi-like organization that has been rotten
Yet easily forgiven by a political flash in the pan

All for grubby politics, none for integrity nor justice
For a man slain on the very eve of his wedding day
Oh we weep, what treachery to become so solicitous
To abandon principles, an evil crime now is gainsay
Posted by KTemoc at 1:31 pm