The Plot (among other plots)

Recall my mentioning that Mahathir had in no uncertain terms spurned Lim KS politically amorous wooing of him to get rid of the current PM? 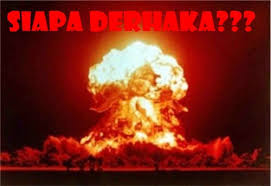 Then I had said that Mahathir (or any UMNO member) wouldn't want to be seen in collaboration with an Opposition MP to attack an UMNO PM as that derhaka-ish act (to UMNO rather than Najib) would have spelt the end of his iconic status in the Grand Old Party.

Ahmad Zahid Hamidi on Saturday exposed a plot by the opposition to topple the Malaysian government, with an Umno-cum-Barisan Nasional (BN) leader allegedly behind it. He said the plan was to obtain statutory declarations from the opposition members of Parliament (MPs) and to pull in the support of BN lawmakers in toppling the government through the "back door".

Ahmad Zahid, who is also Home Minister, said the matter was serious and he had received information on it from reliable sources.

"Purportedly, all the 87 opposition MPs and an independent MP, making up 88, are trying to get BN MPs to support their move," he said.

112 is a majority in the federal parliament but 113 makes it sweeter, with a Yang Dipertua from that bloc without interfering with the simple 112 majority. Thus the alleged plotter(s) needed only 113 - 88 (assuming PAS is also with the plotters) = 25 BN MPs.

But Zahid's preemptive attack has been surprisingly quite effective against that supposed "916 Mark II", with two prominent figures emerging swiftly to deny they were the mastermind and thus were NOT derhaka-ish to UMNO, wakakaka.

Ku Li said he was still behind Najib notwithstanding his admisison he did have a chit-chat with Mahathir.

Muhyiddin was more circumspect. The way I read it (from the news) he said he would be “stupid” to wreck the government he helped build", but which allows him, unlike Ku Li, to remain discretely ambiguous vis-a-vis Najib, wakakaka.

As a matter of fact, Moody is still questioning Najib openly on 1MDB despite his avowed loyalty to Najib more than a week ago and his current denial of being the mastermind behind the plot to topple Najib as alleged by Zahid, but as we know, UMNO members' loyalty to their respective leaders ain't worth a sh*t.

Today TMI reported (yes, today even after he has denied being involved in a plot to topple Najib UMNO, wakakaka) Moody saying, the public were losing their patience over the matter and urged that the investigations into the troubled state-owned firm be completed as soon as possible. "The prime minister said wait, wait, wait. How long more to wait? Until the moon falls into our lap?" he asked when opening the Pontian Umno division meeting in Pontian Kechil today.

I bet Johor UMNO is the only obstacle between Moody and Najib's wrath. He'll be toast once Najib can secure Johor UMNO's complete backing. I've also read from RPK's post that:

A certain Regent of one of the royal households from one of the southern states of West Malaysia then had an audience with His Majesty the Agong to inform His Majesty that these 120 SDs are in the process of being finalised and that a vote of no confidence would be tabled in Parliament to force Najib to resign as Prime Minister.

The Regent from this southern state asked His Majesty the Agong to support the move to oust Najib, which would be done via a vote of no confidence, while the SDs would ensure that the 120 Members of Parliament do not get cold feet when the time comes like what happened during Anwar Ibrahim’s ’16 September’ fiasco in 2008 that crashed and burned in a most dramatic manner.

His Majesty the Agong gave this Regent a dressing down and said that he would not support a move to oust the Prime Minister on the basis of lies, innuendoes, insinuations and fabricated allegations supported by doctored evidence.

The Regent felt like a schoolboy who had been caught stealing muffins from the pantry and wished that the ground would open up so that he can disappear and be put out of his misery. His Majesty the Agong then sent the Regent packing with his tail between his legs and with a strong and categorical ‘no way, Jose’.

Nonetheless, it seems Zahid has become quite an effective bulldozer for Najib. I suppose his preemptive strike against would-be plotters has thrown them off stride, at least for a while and has bought some time and temporary relief for Najib.