Keep soldiers in their constitutional barracks - letter to Malaysiakini

My letter to Malaysiakini published today. It's a much expanded version of Wait a ding-dong minute, General Blimp published earlier this afternoon as a blog post. For your reading pleasure:

Hang on a ding-dong minute, my dear Gen Blimp 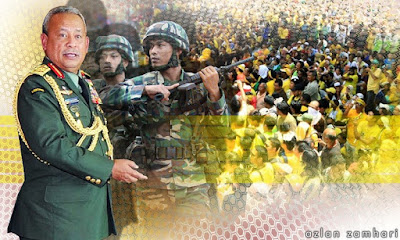 I read with extreme trepidation that Malaysian Armed Forces (ATM) chief Zulkifeli Mohd Zin, in referring to the Bersih 4 rally, said the military will take over the role of the police in containing a situation which has been categorised as a threat to public order.

In a democracy governed by civilian rule and leadership like Malaysia, there is no such role for the army or for the matter, the air force or navy, to ‘take over’ the role of the police, even in a situation of civil commotion and disorder, to wit, riots a la May 13, which may represent threats to public order.

Okay, we have no problem with that.

Let's now shift our look from the Army's PRIMARY to its SECONDARY purpose. The Army’s secondary roles are to ASSIST the Royal Malaysian Police and other civil authorities in the maintenance of public order and providing assistance in time of national disaster, and NOT to ‘take over’ the police role.

In an internal strife, as had been the case of the Emergency or the insurgency by communist terrorists (CT) in yonder years, the police was responsible but because it then lacked the manpower and expertise at that time to deal effectively with the CT problems, it called upon the military to assist it in the war against the communist terrorists.

The military must not be under the mistaken belief that they were not in a supporting role to the police, even in that insurgency war where our entire armed forces participated.

Yes, I do worry when the military want to ‘take over’ this or that from civilian control, namely, the police. We are not Thais you know; indeed we’re Malaysians.

My fears deepen immensely when I think of the army handling the Bersih 4 protesters. In Bersih 3, no thanks to some trouble-makers, we had fairly nasty experience with the police, so just imagine how our Berish 4 participants will fare with the army?

The reality is the army is roled for war against external foes and trained in combat for that. The police is roled for security and law and order within our community. To put it in simplistic terms (which admittedly have their limitations) the soldier is trained to kill the enemy, while the police is trained to protect the community and maintain law and order by legal means.

So we don’t want soldiers trained to kill to be controlling or suppressing our civilian Malaysians who may be in the Bersih rally.

Just recall our past government’s very discerning handling of our civilian population in the rural areas, in particular Chinese villages, during the Emergency, and how we kept the army as much as possible away from those civilians.

Some CTs when in hot pursuit by the military during the Emergency had the naughty tactic of running into a Chinese village to escape by merging into the local population. The military much to their chagrin would not be permitted to continue the chase into the villages. They had to stop at a specific distance from the village and hand over the hunt to the paramilitary Police Field Force (PFF), which was essentially also our mata-mata.


Not trained to handle civilians

That was because our government knew that soldiers weren’t trained to handle civilians and I needn't provide graphic examples of what would have been the unfortunate results of allowing soldiers to deal with civilians as the American military have provided ample examples from Vietnam to Iraq and Afghanistan.

That was the reason for having the PFF during the Emergency, men or mata-mata who had been trained to handle civilians in searches in their homes under combat situations.

I also recall Dr Kua Kia Siong, author of the book May 13, telling us the story of how Abdul Razak Hussein had wanted emergency rule for the country after May 13 and for the military to effect that rule, but Lt-Gen Hamid Bidin, then Chief of General Staff (title subsequently renamed Chief of Army) advised Razak against that, saying that the politicians (people’s representatives) would subsequently find it extremely difficult to pry the power out of the military’s hands.

Such was the hallmark of a military man of caliber who knew the necessity of civilian pre-eminence in a democracy and had advised his PM correctly and wisely.

Yes sir, we must be very alert to soldiers wandering out of their ‘constitutional barracks’. We have seen nasty examples up north. And haven’t I on Dec 13, 2013 predicted that Thai military coup d’etat in a letter titled Thailand’s unpleasant lesson for Malaysia to Malaysiakini ?

That has been why I was not impressed by Bersih’s Maria Chin Abdullah for calling an air force officer a hero when that military person deliberately violated Armed Forces Council Instructions to perform a song and dance about the Election Commission’s so-called indelible ink to the media. For him, it was not good enough to have made a police report. His antics were so lamentably political that I don’t have an iota of sympathy for his career end.

If one wants to participate in politics then one should leave the military and return to civilian life which would be the correct lifestyle for a political career. And that military officer’s unacceptable politicking was given undesirable encouragement by Madame Maria Chin Abdullah.

Keep those soldiers in their ‘constitutional barracks’.

Thus General Zulkifeli Mohd Zin has been very very very much remiss in NOT knowing his army supporting role and its limitations in a situation of public disorder. The military can participate in restoring law and order when the civilian authority calls upon it, and then only in assistance to the police. The army does NOT take over the role of the police.

It seems this general has a propensity to make rather outrageous statements. Last year, around the same time, he stated that the Malaysian Armed Forces considered any insinuations or insults against the royal institutions to be an attempt to weaken the military itself. So, was the Malaysian Armed Forces weakened in December 1992 when Umno Members of Parliament like Dr Affifuddin Omar said:

“How can we continue to uphold rulers who are known to be robbers, adulterers, drunkards and kaki pukul (thugs)?” [...]

“They (the rulers) must be made to realise that they do not own this country. They are not Superman but placed on their thrones by the people.”

Or what about Wan Hanafiah Wan Mat Saman, once the Umno MP for Pokok Sena, in a speech, also in Parliament in 1992, saying he preferred the Malay Rulers be treated the way the Indian Maharajas were treated. Wan Hanafiah said:

“After the struggle for India's independence in 1947, Deputy Prime Minister Sardar V Patel was given the task of negotiating with the Rulers to phase out them. Patel rounded up the Maharajas and put them in a hotel. On the first day of discussion, he could not get them to agree to the government’s proposal.”

“On the second day, he placed soldiers around the perimeter of the hotel. On the third day, he cut the electricity supply; on the fourth day, he stopped the water supply and on the fifth day, he stopped food from being brought in. On the sixth day, all the Rulers, who were confined to the building, agreed to the government proposals.”

Wan Hanafiah said that “a similar approach could have been taken to solve the present problem with the Rulers.”

The general has said something of constitutional significance, so frightening that I believe the defence minister and the attorney-general, the nation’s No 1 law officer, must take a very careful look at this general’s pomposity which has failed to recognise the constitutional roles and limitations of an army in a democracy of civilian rule.

His apparent lack of understanding of the constitutional limits for our Malaysian Army is verging on being dangerous.

I appeal to the defence minister and attorney-general to take note that a 'Malaysian stitch in time saves a Thai nine'.