I agree with Khairy Jamaluddin that the transfer of 2 MACC executive to the PM Department is looking bad for Najib. 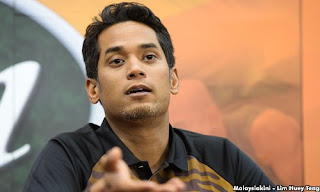 The M & M slogan in earlier years, when it was Tweets, was 'melt in your mouth, not in your hand'.

Today we could say the M & N slogan seems to be 'weld up your mouth, not shake your hand'. Wakakaka.

But in Malaysian politics, at times we see very heavy handed actions, for example, Anwar being jailed for sodomy when the truth was he tried to oust Mahathir, wakakaka. The World Socialist Website reported on 03 Oct 1998:

For the first time in more than a decade, the Malaysian regime headed by Prime Minister Mahathir Mohamad is being rocked by a continuing wave of anti-government demonstrations and rallies. [...]

The immediate impetus for the protests has been Mahathir's heavy-handed treatment of former deputy prime minister and finance minister Anwar Ibraham. Sacked from his government posts on September 2 and expelled from the ruling United Malays National Organisation (UMNO), Anwar was subjected to a barrage of flimsy allegations in the government-controlled press, involving sexual indecency, hindering police investigations and sedition.

Anwar, who has vigorously denied the accusations, was arrested on September 20 and held for nine days under the country's Internal Security Act (ISA) before being taken into court on Tuesday and charged with three counts of corruption and four of homosexual acts. He had visible bruising to the face and neck and accused the police of beating him unconscious on the first night of his detention.


Another such heavy handed action was the expulsion of Khalid Ibrahim from PKR in August 2014. The reason was more justified, in his refusal to heed party instructions to vacate the post of MB of Selangor.

The MCA also had several experiences in such heavy handed actions. As for our remarkable MIC, wakakaka, what more do I need to say. And likewise for the DAP, Gerakan and PAS as well.

I'm just surprised that Najib hasn't yet expelled Muhyiddin. More probably, he doesn't want to completely alienate the Johor UMNO members. Like it or not, even among Malays there are regional partisan loyalties which could possibly see a Tuah-Jebat type conflict. It doesn't help when state royalty step in to support their respective most favoured sons.

We have had witnessed such unprofessional politically-partisan behaviour in the lamentable conduct of the Penang State Development Officer (SDO) who behaved biadap-ishly in 2010 against the Chief Minister of Penang.

In June 2010, Malaysiakini’s Guan Eng wants SDO to explain arches fiasco reported Lim questioning the erection of two controversial arches on the way to the Penang Botanical Garden by the federal government.

The Penang state development officer (SDO), was Nik Ali Mat Yunos, a federal civil servant in charge of the project. Lim was so incensed by the arrogant non-accountability of the SDO that he remarked Nik Ali was "openly and blatantly" sabotaging the state government.

Lim stated: "He is like a little Napoleon in the civil service who gets high pay and does nothing for the people, but instead causes losses to them."

MKINI reported that Lim wanted Nik Ali to come clean about the RM150,000 plus losses over the planned demolition of the two twin arches recently built for an expansion project under the Tourism Ministry.

Lim took offence with Nik Ali for refusing to explain who - which department, state or federal government - was responsible for the staggering losses, stating:

"If he is willing to tell us that, we will not pursue the matter. Every sen counts, because it is a question of public trust."

Lim saw red over a letter sent by the SDO's office dated 13 Oct 2009 to the Drainage and Irrigation Department, giving a "RM5 million ultimatum" to the state.

The letter stated the state would have to settle "pending issues" on the Botanic Gardens' facade and pavilion development, failing which, federal funding of RM5 million for the project would be withdrawn.

Lim stated: "This is an example of how the SDO's office is trying to rush development projects through without due consultation and feedback."

Could you f* beat that, a civil servant refusing to account to the CM of a Malaysian State?

But wait, there was even MORE, and WORSE!


As if that was not bad enough, the SDO responded by calling the Chief Minister 'biadap' - yes, believe it or not, a f* public servant abusing a people's fully elected representative with the gross insult of 'biadap'.

Who was the one being 'biadap'? Forget about him being a civil servant, but what happened to old world Malay courtesy, civility, adat of being halus and bersopan-santun?

Technically he should be chastised if not sacked in ignominy for violating the Civil Service code of conduct (many times over) but it was obvious he’s allied to UMNO, so it was hardly surprising that Mohd Sidek, then the Chief Secretary, defended him instead. See Malaysiakini's No action against Penang SDO, says chief sec.

Mohd Sidek Hassan, former Chief Secretary to the government, also DISCREDITED himself by criticizing Lim GE as being ‘excessive’ instead of reprimanding Nik Ali’s violation of the civil service code of conduct in (1) attending a political gathering as an active participant and (2) for behaving in the worst biadap manner in his brazen use of rude words to publicly attack a people’s representative and a state Chief Minister at that.

Yes, UMNO has over the last 35 years politicized the civil service until the civil servants couldn't distinguish themselves as PUBLIC servants anymore but more probably as UMNO members or at best employees of UMNO.

And the Penang SDO case was in its experience with a non-UMNO state government which was very clear cut for them on where their loyalty should be with.

What happens when they are called upon to distinguish their loyalty (within UMNO) with either M or N?

As if that is not troubling enough, some federal opposition members have also taken sides between M and N, with DAP and PKR being pro M whilst PAS is pro N, wakakaka.

Today it'll be very very difficult to convince me of true professionalism among the MCS including the PDRM and MACC, in particular the last.

Until the Teoh Beng Hock murder case is satisfactorily solved with justice for the family of an innocent man killed, I have my doubts as to the MACC officers' professionalism, and f* Lim KS' questionable support for them. Read also my post Forgetting Teoh Beng Hock.

But a highly politicized MCS (including the PDRM and MACC) is something the UMNO-led government has to suck on, as it has been solely responsible for and tolerant of such a lamentable state of affair in the civil service.

Nonetheless, it sure as hell doesn't look good for Najib in those sudden transfers, wakakaka.

(1) How to cure the rot in public institutions?