One could be excused for believing the 13th general elections in Malaysia is still not over as some Malaysians continue to demand on a different outcome (results) of the elections to what it has been, wakakaka. 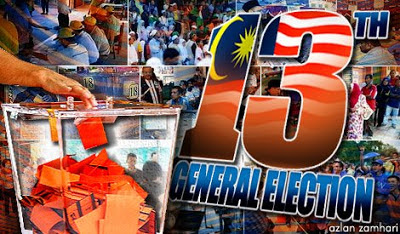 I would claim to be among the earliest (if not the earliest) to explain why BN with 47% of the popular votes ended up with 133 or 60% of the 222 federal parliamentary seats. I wrote on that in my 06 May 2013 post The Morning After - Part 1 as follows:

But this is a result of a combination of 'first past the post' contest combined with gross gerrymandering where in one federal constituency, only 15,000 registered voters can elect a MP to represent them in parliament while in another constituency, nearly 150,000 voters may only vote for also one MP to represent them. The voter in the former has ten times the say in parliament compared to his/her sardine-ized fellow Malaysian in the latter, who is perhaps a 'lesser' Malaysian.

The job of a truly independent impartial Election Commission, which of course doesn't describe the Malaysian EC, would have endeavoured to ensure the universal suffrage of 'one person, one vote' in a democracy, thus dividing the 222 federal constituencies into lots having an average of, say, 60,000 voters in each [some minor variations may be allowed but subject to justifications, etc].

Kapar would then be divided into Kapar East (or North) and Kapar West (or South) represented by 2 MPs while Putrajaya doesn't deserve to be be a federal seat by itself and would be subsumed under another Wilayah constituency or combined with Labuan as one.

But that's only a pipe dream as the ruling party will never allow such impartial professionalism to come about for the EC. Let me share a very closed secret with you - the EC is in fact UMNO's real fixed deposit, not just some pro-UMNO states.

Nonetheless, I would say, notwithstanding suspicions of UMNO's alleged 'creativity' with the alleged help of the EC, Najib has done well not to let the BN lose and, what more, also in regaining BN's control of Kedah and retaining rule in the Silver State, the latter very much to my surprise!

It's a truism of politics that political parties lose elections, not win them.

I believe poor Anwar Ibrahim must have thought he would end up as the PM of a post GE-13 situation when he made a secret peace deal with Najib which was brokered by former Indonesian VP Jusuf Kalla.

The broker had recently emerged to criticize Anwar for reneging on the peace deal by his continuation of post-election protest rallies.

Of course Anwar's fave journalist, Terence Netto, expectedly came up with an article in Malaysiakini on the circumstances and issues surrounding this so-called peace deal which concluded with a one-liner stating "It looks like Anwar has allowed one Bugis, Jusuf Kalla, to get him snookered by another, Najib Razak."

Let me just say I am not at all impressed by Netto's terrible Bugis remarks.

Anwar has no shortage of supporters in this apparent attempt to create a state of political instability, not when his supporters possess the mindset of Myrmidons. They drew heavily on the 51% vs 47% popular votes as indicative of Anwar's right to be PM without even understanding the Westminster first-past-the-post character. And what for - why let the inconvenience of facts interfere with jolly good protests!

They talked about the BN government being a 'minority' government without understanding that its 133 seats out of 222, namely 60% of the total number of parliamentary seats, is not a minority in any way.

Their Myrmidon mindset was apparent when in an (pre election) article about Hishamuddin Hussein escaping unscathed from a private chartered helicopter during his election campaigning, some readers of that news article berated him for misusing RMAF (TUDM) helicopter for his political purpose.

Attack, attack, attack - that's all they can think of. Just right up someone's alley, which to understand more will require you to read The fantasy of Anwar Ibrahim? wakakaka.

In my second post-election post The Morning After - Part 2 I stated very clearly my 5 reasons why Dr Mahathir would NOT oust Najib from being PM despite not winning 2/3 majority in GE-13. In support of this, my personal views, I also wrote on Najib's election achievements in a letter to Malaysiakini which was surprisingly but to my entire delight published as an article titled (wakakaka) Apa lagi UMNO mahu?

In one of RPK's articles I left a comment about my 6th reason which I missed out in The Morning After - Part 2, that currently UMNO has no one suitable apart from Najib to lead UMNO.

Thus I am not surprised at all to hear Dr Mahathir echoing my views in Malaysiakini's Mahathir says Umno has no alternative to Najib.

But our dear Olde Man couldn't resist harping on the Chinese tsunami bullsh*t, stating that national unity will be an uphill task because, according to him, "We are still striving to bring the races together".

He striving to bring the races together? Wakakaka, what an obscenity of such a brazen claim by him, and then some.

He provided the nonsense that because of racial polarization, Najib couldn't obtain Chinese support, conveniently avoiding mention that the Chinese had voted for Malays in PKR and PAS, while Malays also voted for Pakatan. And I feel sorry for those Chinese who had voted for BN to be so insulted by Dr Mahathir.

Though Dr Mahathir was speaking at the Foreign Correspondents’ Club in Japan, he was obviously addressing his propaganda to the Heartland faithful. Given that the Malay middle and upper social class and Malay young voters have swung towards Pakatan, his strategy for UMNO would have to be keeping up the faithfuls' rage against the evil bogeymen behind every Hibiscus plant in Malaysia, those bloody Chinese.

And that iniquitous feathering & tarring appears also to be the role of Ahmad Zahid Hamidi, the world's best known patriot, someone who has never served in the armed forces or police but who has no compunction insulting non-Malay policemen or servicemen who gave their lives in their duties to the nation, to wit, a cheap armchair warrior in his air-conditioned office. For more please see my posts Patriotism - a useful UMNO word in which I penned:

... on 09 Nov 2010, predictably as to be expected for UMNO ‘patriots’, Defence Minister Zahid Hamidi stated in response to a question in Parliament that the low number of Chinese and Indian recruits in the military could be due to the Chinese and Indians [being] 'not patriotic enough'.

Zahid Hamidi, once a very close ally of Anwar Ibrahim and the man who accused Dr Mahathir of nepotism and cronyism in an apparent impatient move by the Anwar faction in UMNO to nudge then-PM Dr M out for Anwar’s final ascendancy to the PM’s post, but who has since abandoned his allegiance to Anwar to be allied to Najib, is hardly an appropriate person to talk about patriotism or loyalty. But Zahid is certainly the very model of treachery in UMNO or, if one really wants to be kind to him, a mercenary unprincipled opportunist.

You may also wish to peruse:

Meanwhile in the 'other' Malay world wakakaka, Terence Netto's words about the 'intent' of PKR members have once again been manifested in Malaysiakini's Let us into state GLCs to axe those against PKR.

Netto had written in last year's Malaysiakini’s Selangor MB's pol sec Faekah at bay in which he said of Khalid Ibrahim, as follows:

However, he has been slow to recognize as the PKR leader of a state regarded as a jewel in the federal crown that politics is also about providing opportunities, rewarding loyalties and managing expectations of the party faithful.

“… politics is also about providing opportunities, rewarding loyalties ..... of the party faithful”?

“… he has courted trouble with sections of the party - mainly ex-Umno members - ..... ravening for whatever rewards were to be had …”? 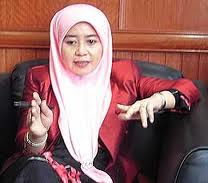 As if that was not bad enough, Netto then went on to criticise Khalid’s political secretary, Faekah Husin, the target of PKR’s inner coterie, for not cultivating those in the party who would be crucial to the fulfilment of her (alleged) political ambitions.

Now, would I be correct in saying that, according to Netto, Sweetie didn't given a rat ass f**k about 'greasing people's palms'? If so, bravo to Faekah.

And no wonder the inner coterie in PKR now wants to postpone party polls. 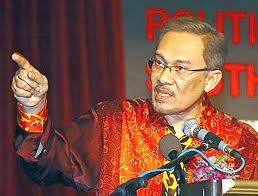 But to Anwar's credit he has finally gathered his balls together and put paid to those 'ravening' (wakakaka) ex-UMNO members - read Malaysiakini's Anwar steers PKR through as 'storm' fizzles out. Maybe there's still hope for Anwar Ibrahim; maybe he knows what's good for him and his political future.

But to end this post, Pakatan people especially PKR members better come back to Earth before some innocents get hurt for the unjustified glory of "God's gift to mankind".

I don't give a f* if you glory-wannabes have a death wish but it's the innocents I care about. 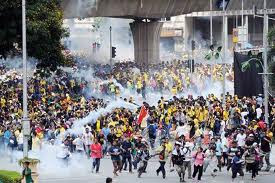